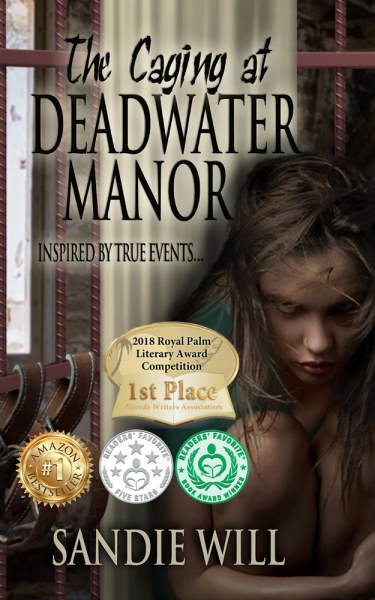 The Caging at Deadwater Manor
by Sandie Will
Genre: YA Psychological Thriller, Horror

“This book is ‘One flew over the Cukoos nest’ on speed.” Goodreads reviewer
A dad with a vendetta. An unsuspecting daughter. A psychiatric hospital known for questionable acts. And staff who keep secrets in the attic.
FIRST PLACE – FLORIDA WRITERS ASSOCIATION – ROYAL PALM LITERARY AWARD FOR YOUNG ADULT/NEW ADULT FICTION
RECIPIENT OF THE 2017 READERS’ FAVORITE HONORABLE MENTION BOOK AWARD IN YA HORROR
On a cold, January evening, fourteen-year-old Jeannie Kynde is told that her beloved mother drowned in the murky waters along Florida’s Gulf Coast. Her distraught father turns on Jeannie, no longer the caring father she once knew. Four years later, Jeannie is finally old enough to escape her father’s clutches, but he has different plans. He imprisons her at Deadwater Manor, a psychiatric hospital with an unscrupulous past. Between endless psychiatric treatments and a hospital staff up to no good, Jeannie faces insurmountable odds as each day ticks away. Will she be locked away forever? Or can she fight against the nightmare that has now become her world?
If you like suspenseful shockers, you’re sure to love this psychological thriller that will keep you on the edge of your seat and stay with you long afterward. Check out the great reviews on this novel that debuted on the #1 Hot New Releases bestseller list.
Note: This book is intended for mature young adult, new adult, and older audiences due to profanity and sensual content.
BACKGROUND:
The inspiration for the story came from Sandie’s beloved father who worked in various psychiatric hospitals during short periods of his career. In the attic of one such hospital, he made a disturbing discovery – one that bothered Sandie so much, she had to create a story around it. Though fiction, many parts of the book intertwine the patient routines, treatments and outbursts that she learned from her father and other research in a way that makes the story vivid through Jeannie’s perspective.
**On Sale for only $2.99!!**
Goodreads * Amazon
[youtube https://www.youtube.com/watch?v=icLhnJAK6WM] 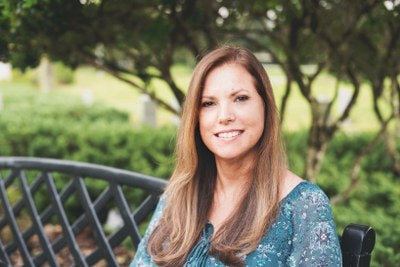 Sandie Will is an international award-winning psychological thriller novelist who lives in Tampa Bay, Florida, and works as a geologist by day. She has published two novels and another is on the way. Her first novel, The Caging at Deadwater Manor, is a young adult psychological thriller/horror that received first place in the 2018 Florida Writers Association Royal Palm Literary Awards for young adult/new adult fiction and an honorable mention in the 2017 Readers’ Favorite Book Awards for young adult horror. Her second is a recently released adult psychological thriller/horror titled, The Takings that is a Finalist in the 2020 Florida Writers Association Royal Palm Literary Awards for Blended Fiction. She is currently working on the sequel which will be released in 2020/2021. She has been married to her husband, Charlie, for over 30 years and they have two sons. Her favorite place to write is in her back room “treehouse” in the arms of an old oak.
Website * Facebook * Twitter * Instagram * Bookbub * Amazon * Goodreads