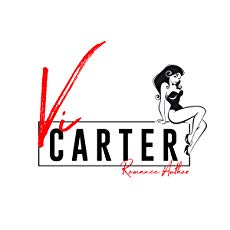 Vi Carter and I connected through social media.

Married with one child, Vi divides her time between motherhood and all the other hats she wears as an Author.

Vi’s main goal is to give readers the same emotional ride that she got from reading Colleen Hoover and Jennifer L. Armentrout books.

I think this is the part that so many of us authors dislike, well; I do. I feel like I’m always scrambling for something cool to say, like I live in a castle with ten dogs or something. But my life is pretty simple. I live in Ireland, in the countryside surrounded by cows and sheep. I’m not much of a people person so I like the isolation. I have a toddler who keeps me busy and another wee one to join us at Christmas.

In 2012 is when I first put pen to paper, but even then, I did it for me. It was others who encouraged me to publish it so I did.

My favorite genre is fantasy, I’m a huge vampire girl. But I’ve never written a vampire story. I write under two pen names; one hasn’t launched yet but is for my fantasy writing and the other which was launched October 2018 is for Contemporary Romance.

Contemporary are for Young Adult and Adult. The All of Me Series is focused at a younger audience all the rest are Adult.

I’ve released a Box-set of three books that I wrote in A Broken Heart Series.

I’ve tried so hard to bury my past.
But nothing stays buried forever…

When Derek walked into my life, he made me feel things I’d hoped never to feel again. The box I hid all my secrets in is opening, and I don’t think I am able to keep it shut this time.

My past is back to haunt me, but Derek is my distraction but I’m not sure he’s enough to keep the ghosts away. I’m not sure if I’ll walk away fully intact this time.

He’s cold and unsociable but underneath the glinting, dangerous surface, there’s something I’m drawn to. I‘m intrigued.

Intrigued enough to throw caution to the wind and follow him down a very dangerous path. One I hope I come back from.

On the day I get arrested, I ring my best friend to bail me out, instead she sends her brother, Emmett Harrington. He’s a far cry from a knight in shining armor. He’s more like the prince of the criminal underworld. His armor–A 9mm pistol.

Turns out, he’s pissed off a lot of people. Before I realize it, I‘m kept hostage at one of his mansions.

But high walls and the force that is Emmett Harrington might not be enough to keep me safe.

This world breeds monsters in the form of men. There is no justice, or revenge, or higher power that will intervene. The only thing you can do is walk away and leave everything you know and love behind…

Leaving everything behind I sign myself into a psychiatric ward. All I want to do is sleep at night and not fear what might happen. The high gates and security mean safety that is, until I meet Craig.

I’m a recovering addict I’ve been clean for a year. The walls of the hospital offer me safety. I can’t leave if I do, I know I won’t survive. This place has become my salvation that is, until I meet Laura.

We get put together in a group assignment, and we must learn about each other, but the closer I get to Laura, the more I am forced to look at the person I am, and it isn’t pretty.

I wonder if you can truly fix something that wasn’t just broken but shattered?

Russia was cold, and it was the kind of cold that bit into your skin. The kind that made you want to bite back.
“Mr. Harrington, welcome.” My Russian informant spoke over the noise of the helicopter blades that still spun.
I crouched down as I walked with him. “Where is he?”
“Mr. Harrington, my boss needs assurance that you will not kill him.” I stopped walking; the bite of the cold was keeping me in check, the pain like a rubber band against my wrist. A warning.
“No assurance. I am going to kill him.” I walked away now, into the waiting black car. My informant climbed in after me.
“Mr. Harrington, I cannot take you to him, then.” I pulled off my leather gloves and blew into my hands. The driver had the heating on and it felt like my skin was stretching from the change in temperature.
“Fine, I will not kill him.” I lied; I didn’t have the time to waste. I knew I was dealing with very dangerous people, here, but they didn’t know I had severed my link to my father. By the time they figured it out, I would be long gone, and the priest would be long dead. He studied me for a moment, and I let him. Finally, he nodded and told the driver the address in Russian.
We arrived at a rundown industrial estate and, as I went to get out of the car, he stopped me. “You need to step where I step, there are still active mines here.” He stepped out of the car and I followed him. I followed his steps precisely, not wanting to end up in bits, but I also took in my surroundings, escape routes, movements. We stepped across several wires that would have been invisible to the eye, but now that I knew what I was looking for, I could see the dew that clung to them. The driver moved behind me, and I tried to think how I could kill the priest and still walk away. But the closer I got to the building, the more I knew that this might be the one man that I wouldn’t cross off my list today. But there was always tomorrow.
We entered a building, the back wall gone, exposing a factory wall that was black from a fire long burned out. The dripping of water was in rhythm with our footfalls. We moved through the building and into another, each one destroyed. The walls that were still standing were decorated with bullet holes. Our polished shoes and overpriced suits didn’t belong here, or maybe they did.
We entered a room, and the nervous shuffle from the man who sat in the center made my stomach twist. I couldn’t see his face, as it was covered with a sack. His hands and feet were bound to the chair.
“Ask your questions, then we leave Mr. Harrington.” I nodded. I had no questions. I really had two things to do. One: confirm that he was the man that I was looking for. I pulled off the sack, and he blinked. His washed-out blue eyes looked up at me with a mix of fear and confusion. No recognition was there, but once again my stomach lurched. It was him. The second thing was to kill him.
“Who are you?” he asked, the fear in his eyes consuming him. I swallowed it up into the black hollow that was carved inside me. I loved it when they showed me fear. It fed the darkness within me. It allowed me to remember why I was doing this. Now he knew how the people he had tormented felt.
“Who are you?” I repeated back. Now he looked at my companions.
“Albert, what is this?” He spoke to the man who had brought me here.
“Father just answer his questions, then you can leave.” Albert looked away, guilt in his eyes. He knew the priest, maybe even liked him.
“What do you want?” Father Declan asked, his words angry now.
“When I was a little boy, my father asked me that exact same question. I told him I wanted the world, and do you know what he said to me?” I kneeled down, coming eye level with the priest. “If I want the world, all I have to do is reach out…and take it.” I smiled at the memory, which empowered me even as a boy. I knew anything was possible. I knew no matter how they tried to break me, I would break them back.

Build a fan base and have patience.