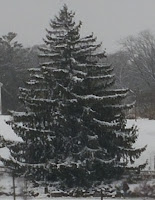 It’s December.  We got our first snow yesterday with about 3-6″ falling.  It was beautiful – white against the dark green of the pines and a variety of colors of the houses.

This was my feeling before I had to go out in it.  It’s late for the first snow.  Normally we get a little in November but not this year.  I like the white, the snow covered pines and trees.  The contrast of the colors between the snow and the buildings, trees, and so on.

We got enough snow to actually have the snow plow hit our road last night.  Usually if we have under 6″ we don’t get plowed out.  This makes driving on our road a challenge.

Something to note – I don’t have to deal with removal of the snow.  My husband does all of that.  The reason being is I have this tendency to stop breathing when I shovel or do much in the cold air.

This lack of dealing with snow removal means I can take a more positive point of view towards the snow.  I don’t have to spend time making sure the driveway and sidewalks are clear.

From a looking outside, the snow was pretty.  However, I had to switch coats to my winter weight coat.  I also had to decide which scarf to add to my jacket (which is always a choice because I have so many pretty ones).  I had to drive on roads which could have been slippery.

Since it’s the first snow, people were driving more cautiously than they needed to.  It’s always interesting with the first snow.  People seem to forget until they fishtail the first time or they drive so slowly it’s ridiculous.

I maintain the snow is pretty but I empathize with those who have to work on the removal and who work out in the weather.  Winter has begun.  I’m going to attempt to keep a positive attitude and recognize the beauty the weather brings us even during this cold season.