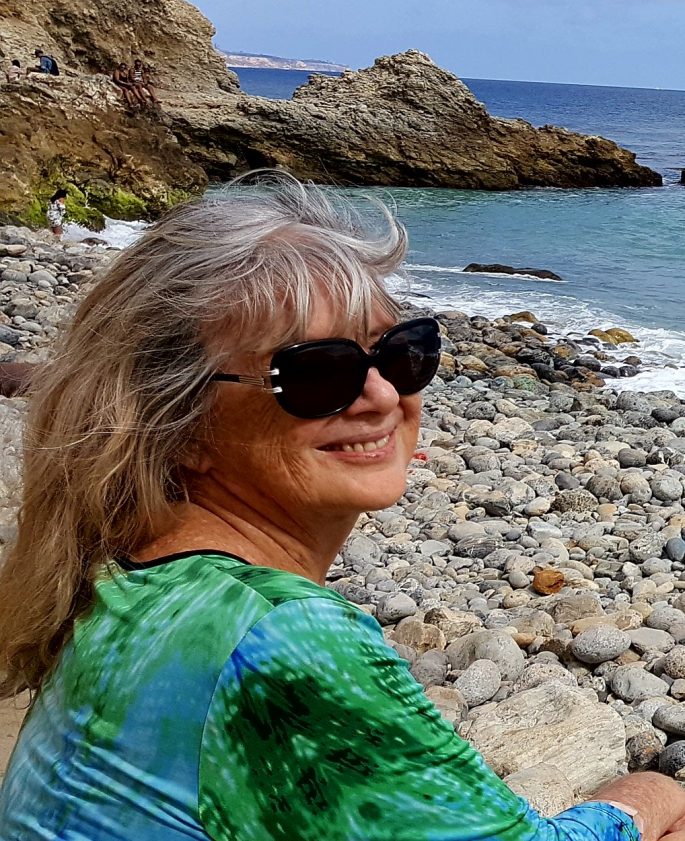 Judy Moore and I connected through social media. I hope you enjoy her interview – I know I did!

Judy Moore writes mystery novels and thrillers, as well as lighter family fiction. She is a longtime news writer, editor, and magazine feature writer, and has a master’s degree in journalism. Her fiction and nonfiction work has been published in numerous national publications, and her novels are published by BTGN publishers. Her most recent thriller, The Mother-in-Law, is a favorite with Amazon readers. A lifelong Florida resident, she is a former tennis pro and sports writer, so her stories sometimes have a sports backdrop. Her novel “Murder at the Country Club” takes place on a golf course, and her “Murder in Vail” is set on the ski slopes of Colorado. Her Christmas anthology “Christmas Interrupted,” contains three popular novellas: “Airport Christmas,” “The Holiday House Sitter,” and “The Hitchhiker on Christmas Eve.” An earlier novella, “Birds of Prey,” and her new novelette “Football Blues,” are also available on Amazon.

I’ve lived in Florida my entire life. I grew up in Miami playing competitive tennis. I was a highly ranked junior player, played for Florida State University, travelled in Europe, and later became a teaching pro. While at FSU, I became interested in journalism and went on to get a master’s degree in journalism at University of Florida. I worked as a newspaper reporter, magazine feature writer, and editor of national business publications. Because of my tennis background, I also wrote about tennis for several years, as well as other sports. Now, I’m at the point in my life where I can write what I really want to write—mysteries and thrillers.

I never thought about being a writer. I was really good at math, like off the charts, so I always thought I would do something with math. I was one of only two girls selected for advanced calculus classes in college. But after six quarters of calculus, it didn’t seem practical to the real world. I changed majors and started taking journalism classes. It just felt right and writing came so naturally.

I grew up reading Agatha Christie and have always loved reading and watching mysteries. When I left my full-time editing job, I decided it was time to start writing mysteries myself. In the past few years, I’ve written three mystery novels and six novellas. The Mother-in-Law, a thriller, is my latest. Readers seem to really like it and it was fun to write. Murder in Vail is probably my favorite, a whodunit about a family home for the holidays who find themselves snowbound with a killer in their midst. I love isolating people so they have to use their own skills and mental acuity to save themselves.

For adults or young adults, although my Christmas stories can be read by all ages. I don’t like to read sex scenes or extremely violent or gruesome scenes, so I sure as heck don’t like writing them.

I am currently in the midst of writing a new mystery, but my most current release is The Mother-in-Law.

I think there is high interest in the relationship between new spouses and their mothers-in-law. Will they get along? Will there be problems? Mothers-in-law often get a bad rap, usually unwarranted, but in this case, rightfully so. So I wanted to keep the title simple. I think the name The Mother-in-Law, along with the image I chose, portrays the mysterious nature of the book.

In addition to the mother-in-law, the characters are newlyweds Victoria and Brad, as well as Brad’s five-year-old son Andy. He plays a significant role in the plot.

After a whirlwind romance, a young woman from California makes a rash decision and marries a handsome Floridian after knowing him for only one month.
She gives up everything she knows to move cross countrv to live with her new husband, a widower, and his five-year-old son.
Everything seems idyllic until they arrive at her husband’s oceanfront home, and she meets her mother-in-law. There’s something strange about the woman and the mother/son relationship.
It’s not long before her suspicions begin to overwhelm her as she becomes ensnared in the secrets and lies of her new family.

The moist, warm air felt refreshing until she realized  goosebumps  had begun to appear across her entire body. Something was off, and it was giving her the chills. She had a feeling that she wasn’t alone. A sixth sense told her someone was watching her. Her body tensed, and she squinted out into the darkness. Scanning the patio, she slowly turned toward the house. Then she saw her, saw her silhouette, standing in the window staring down at her. Her mother-in-law didn’t move away from the window, didn’t wave, but just stood and stared down at Victoria. Victoria held her gaze for what seemed like at least a minute. Then, finally, the drape slid across the window, and her mother-in-law was gone.

Yes, several, but I don’t want to describe them because most are near the end. It is definitely tense.

Grab the reader’s attention from the very first page and never let it go. Keep your readers on the edge of their seats. Don’t lose them by trying to show what a good writer you are with a lot of unnecessary descriptions or prose. Keep the plot moving!