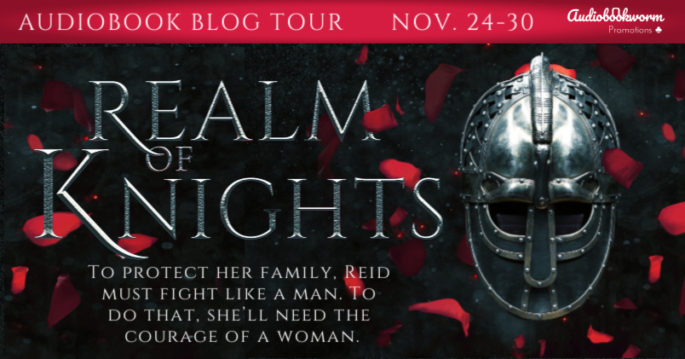 Series: Knights of the Realm, Book 1

Reid has spent her whole life pretending to be a man so she can inherit her father’s estate, but when a chance encounter threatens to expose her lie, she is forced to risk everything. In the kingdom of Marsden, women are subservient to men, and land can only pass from father to son. So, when Reid Ellington is born, the fifth daughter to one of the wealthiest landholders in the kingdom, it’s announced that Reid is a boy. Eighteen years later, Reid struggles to conceal the fact she’s actually a young woman. Every day, her secret becomes harder to keep. When one of Marsden’s princes sees her sparring with a sword, she is forced to accept his offer and lead her father’s soldiers to the border. Along the way, she discovers a covert organization within the army known as the Knights of the Realm. If Reid wants to save her family from being arrested for treason and robbed of their inheritance, she will have to join the knights and become a weapon for the crown. To protect her family, Reid must fight like a man. To do that, she’ll need the courage of a woman. This is the first book in a new fantasy series from best-selling author Jennifer Anne Davis

Jennifer Anne Davis graduated from the University of San Diego with a degree in English and a teaching credential. She is currently a full-time writer and mother of three kids, one weimaraner, and a tortoise. She is happily married to her high school sweetheart and lives in the San Diego area. Jennifer is the recipient of the San Diego Book Awards Best Published Young Adult Novel (2013), winner of the Kindle Book Awards (2018), a finalist in the USA Best Book Awards (2014), and a finalist in the Next Generation Indie Book Awards (2014). Publishers Marketplace listed Jennifer as one of the best-selling indie authors in June 2017. She has also been ranked among the top 100 best-selling authors on Amazon.

Kim is an accomplished and award winning actress and director with West End/Broadway theatre credits. Kim has narrated over 35 audiobooks and counting. She is also an in demand voice over talent in the commercial and corporate arena and owns her own class A recording studio in Nashville. Kim is from the UK but has lived in NYC, L.A. and now Nashville TN. She continues to work in Theatre, Film and TV as an actress and a director alongside narrating audiobooks and commercial voice overs.

I received this audiobook as part of my participation in a blog tour with Audiobookworm Promotions. The tour is being sponsored by Jennifer Anne Davis. The gifting of this audiobook did not affect my opinion of it.

What would you say is the heroine’s biggest challenge (beside getting away with pretending to be a man)? By Jennifer Anne Davis

The heroine’s biggest challenge is discovering what it is she wants with her life. Reid has spent her entire life pretending to be a man, learning to manage her father’s estate, and fitting into society’s expectations of what a person of her position should be. Trough it all, she has never stopped to consider what she wants for herself. Does she want to be a woman and wear dresses like her sisters? Does she want to marry? What about kids? Reid thought being a man was limiting the things she wanted to do. However, when her life is uprooted and she is forced to be Lady Reid instead of Lord Reid, she discovers that being a woman isn’t as easy as she thought it would be. What she thought would be fun—like wearing a dress—she suddenly realizes isn’t so simple. The fabric and design of a fancy dress is restricting. Yet, women aren’t allowed to wear pants. In addition, she discovers that she can no longer speak her mind in public, walk around town unattended, spar or do sword work, or even ride her horse on her own. The freedoms she took for granted as a man are suddenly stripped from her. Forced to face the fact that while she is a woman, she prefers the freedoms men have. However, she can’t have both in her society. She knows she can’t live the rest of her life pretending to be a man. However, she isn’t sure she can stand the thought of being a woman every day either. On top of discovering herself, she also has to navigate the murky waters of love. She has been careful to shield herself from being attracted to men or falling in love. After all, it would have ruined her cover. However, now that she meets a few new people, she doesn’t know what to do when she finds herself attracted to one of them. Reid suddenly feels inadequate, out of her league, and not sure how to behave. She’s never done anything for herself or anything simply because she wants to. But it’s time for all of that to change. It’s time Reid decides who she is, what she wants, and to fight for those things.

More in depth look at Reid: As a child, it was easy for Reid to pretend to be a boy. As long as her hair didn’t get too long, she could easily wear pants and tunics, blending right in with the boys her own age. She would run around, play games with the boys, and she even learned to fight. However, as Reid started to get older, things started to become more complicated. She finds herself needing to wear a hat most of the time. While it is acceptable for men to have shoulder length hair, anything beyond that isn’t common. Knowing this, Reid keeps her brown hair about shoulder length and tied back. When her father presses her to cut it even shorter, she refuses. She knows at some point she has to stop pretending to be a boy and by refusing to cut her hair, this is the first time she is starting to question her father. In addition, when she starts to develop a chest, she has to wrap fabric around herself to hold her breasts down. She doesn’t want to brush up against someone and have them feel her womanly figure. The problem is that now at eighteen, it’s difficult to hide her boobs. Reid’s sister even notices Reid’s curvy hips. When Reid steps out of the castle, she makes sure to take a cape with her. The cape helps to conceal her figure. When Reid spars with the young men her age, they tease her because she always keeps her shirt and hat on. While a lot of the men remove their tunic and shirts, Reid doesn’t have that luxury and is starting to stand out. She loves to spar with twin swords. Her father had special swords made for her that are lighter and easier for her to wield. One of my favorite parts in the book is when Reid has to face Ackley. In order to pull off being a man, she makes sure to have her hat on, she puts gloves on to cover her delicate hands, and she is wearing a cape even though she’s inside. To top it off, she shoves a sock in her pants to make it look like she’s a man. Only, the sock sorta slides to the side and Ackley notices. There isn’t much he doesn’t notice.