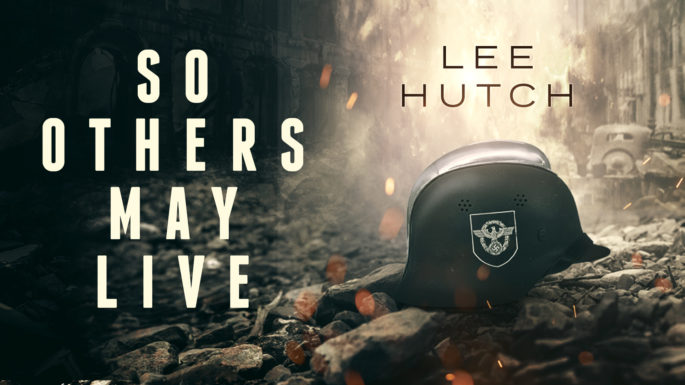 In the space of a single night, four lives collide as Berlin staggers under the weight of British bombs. Mick, a Lancaster pilot, proposed to Grace on his last leave but one more mission stands in between him and the end of his tour. Grace harbors a secret, one which she fears might change the nature of their relationship forever. Unsure of how he will respond, she has decided to tell him upon his return knowing that to do so risks losing him forever. Seven hundred miles away in Berlin, war-weary firefighter Karl is haunted by the images he’s seen both on the home front and in Russia. Now he takes command of a group of teenage auxiliaries who find themselves on the front lines of Germany’s defenses against a nightly rain of fire. On a call, he meets Ursula, a young woman who lives near his station. Karl quickly finds himself falling for her, unaware that she is playing a dangerous game, one which might place his own life in danger. As the raid unfolds, they face choices which will forever change them, and those they love.

Award winning author Lee Hutch grew up on the Texas/Louisiana border. As a child, he enjoyed reading history books and hanging around fire stations. As an adult, he entered the fire service and worked as both a firefighter and then an arson investigator before an injury led to his retirement. Along the way, he picked up a BA and an MA in History and an MS in Criminal Justice. He now teaches history for a community college in Southeast Texas. He loves books, cats, boxing, the Red Sox, and the New Orleans Saints. His historical interests include the history of the fire service, particularly how firefighters have adapted to wartime conditions, the American Civil War, and the World Wars. When he’s not in the classroom or in his office, Lee can be found reading or listening to either a Red Sox or a Saints game on the radio with his cat Anastasia. His next novel is set in Civil War era New York.

I record High Quality Voiceover in variations of my native South London accent – I can offer both bright and enthusiastic commercial reads, or a more laid back and enigmatic explainer style. I have lots of experience in Explainers, E-Learning, Commericals, Audiobooks, and more. I work in VO full time, and deliver high quality audio from my fully equipped home recording in South West London, always including amends or pick ups as needed to ensure complete client satisfction. I use Source Connect or Cleanfeed for remote record-directed sessions and I can travel in and around London and the South East for studio based jobs. Please have a look (and listen) around my site and get in touch by email, phone, or via social media if you’d like any more information on my services or to book a job.

I received this audiobook as part of my participation in a blog tour with Audiobookworm Promotions. The tour is being sponsored by Lee Hutch. The gifting of this audiobook did not affect my opinion of it.

CHARACTER PROFILE FOR URSULA MÜLLER Ursula was born in Wedding, Berlin, Germany in 1920. She is twenty-three when the novel opens. About 5’5 with a slight build, her most striking feature is her red hair. With light blue eyes and a splash of freckles across her nose, Ursula stands out in a crowd, which isn’t a good thing given her nocturnal activities which place her in great danger. Growing up, Ursula was very close to her father, a decorated veteran of the First World War and an ardent social democrat. She was 13 years old when the Nazis came to power, and thus escaped much of the indoctrination in school, unlike her younger brothers. Their involvement drove a wedge between the family with Ursula and her father on one side and her mother and brothers on the other. Ursula worried constantly about her father’s safety given his tendency to speak his mind openly and loudly on every occasion, though even he started to take care around his sons lest they report him. Her mother was struck and killed by a car in front of the Müller’s apartment in 1937. The following year, her father, a committed pacifist after his experiences in the trenches in the last war, died of a heart attack on the day Germany announced its invasion of Poland. Her brothers went on to fight in Russia. Erich was killed in action in late 1941 and Thomas in December of 1942. This leaves Ursula on her own in the world. Ursula loves to read, and she keeps a well worn copy of the German edition of Gone With the Wind with her on the long nights she spends in the basement of her apartment building as she and the other occupants wait out air raids. She lives with two other young women and the three of them work as telephone operators in Berlin. Her roommates believe that at night, Ursula goes and visits a platonic friend named Heinrich to discuss books, but he is a figment of Ursula’s imagination, one that gives her cover for her true activities. She’s a brave, if a bit reckless, young woman. From her father, Ursula inherited a deep love of her country, and it is that love which drives her to work against the regime. For this reason, Ursula refuses any offer of money for what she does. She considers herself a soldier fighting for Germany, albeit a different Germany than the one her brothers died for. With a difficult assignment, an air raid, and the Gestapo on her trail, she’ll have to summon every ounce of courage she has. CHARACTER PROFILE FOR GRACE ROBINSON Grace is a tall, thin young woman with light blonde hair and green eyes. She lives in London, though she grew up in the countryside outside the city. When the novel begins in 1943, Grace is twenty-one years old. She’s been in London since 1940, arriving shortly before the Blitz and she holds distressing memories of seeing a line of bodies outside a bombed out house while on her way to work one morning, along with memories of nights spent in a bomb shelter as the ground shook around her from explosions. To say she had a difficult childhood would be an understatement. Her father, Dr. Robinson, earned a Victoria Cross on the Western Front during the First World War as a young infantry officer. When the war ended, he studied medicine and he has a vast network of contacts within the military and the government. The one thing Dr. Robinson wanted was a son, and he did not bother to hide his dismay when his first child turned out to be a daughter. He got his wish a couple of years later when his wife gave birth to a son. As the unwanted child in the family, Grace sought refuge in books. At sixteen, she bicycled to the nearby village to purchase a copy of Gone With the Wind as soon as the bookstore receive copies. On her return, a chance encounter forever ended any hope of a normal relationship with her father. Grace knows she can’t, or at least shouldn’t, keep what happened a secret from her fiancée, but at the same time she fears it might drive him away forever. Grace is engaged to Michael O’Hanlon, a pilot in Bomber Command. They plan to marry as soon as he finishes his last operation. Having grown up under a domineering father, Grace struggles to find the strength to stand up for herself. She tends to allow circumstances to dictate her actions to her, rather than taking charge. But she desperately wants to learn to be stronger. Perhaps, with the war and all that it requires, Grace can manage it. Her biggest fear is losing the happiness she’s found with Michael, whether it comes by way of him failing to return from his last mission or from her driving him away by revealing the family secret. Though grateful, in a sense, that the war allowed her to meet Michael, she just wants it to be over. But the war has a few surprises left in store for her.

Since this is a World War Two novel, any of the big wartime hits would be suitable. However, there are some more modern songs that are appropriate as well. In my own life, I associate certain songs with periods or episodes from my own life. That is applicable to my novel as well. So let’s begin! I think that if Karl alive today, he would appreciate Only God Knows Why by Kid Rock. In particular, Karl would appreciate the line that says, “People don’t know about the things I say and do. They don’t understand about the s—t that I’ve been through.” Given how haunted Karl is by his experiences on the Eastern Front and in Hamburg during the big raids in July of 1943, that line would really resonate with him. After you listen to the novel, you absolutely must check out the song Bomber’s Moon by Mike Harding. It tells the story of a doomed Lancaster over a German city. Harding’s father was a navigator on a Lancaster and was killed in action a few weeks before the birth of his son. The song is a fitting tribute. It’s perfect for my book, though I did not hear it for the first time until after the book came out. Move over Dawson and Pacy, I Don’t Want to Wait by Paula Cole goes with the novel as well. All of the major characters carry residual scars from the war. Therefore, the line that says, “and the war he saw lives inside him still” would reach out and grab each one of my characters. Though the story takes place over a two-day period, one wonders what the surviving characters lives might have been like once the war ended. And last but not least, A Long December by the Counting Crows fits the story, even though the novel is set in late November of 1943. As that year draws to a close and a new one looms ahead, the characters would not doubt wonder if 1944 would bring about the war’s end. Or would it drag on endlessly until the war consumed everything and everyone. Naturally, 40s hits such as I’ll Be Seeing You and my personal favorite, We’ll Meet Again fit the book, as does the German hit Lili Marlene. But the vintage song I listened to the most while writing it was Keep the Home Fires Burning, which was popular in both world wars. Though it was likewise popular in both of the wars, I do wonder whether or not Michael would like It’s a Long Way to Tipperary, given that the song is poking fun at the Irish. He does have a sense of humor, so he’d probably be whistling it to himself in the cockpit of his bomber. So there you have it! After you listen to the book, give these tunes a listen and see if you agree that they fit the overall tone and mood of the novel. Or, if you think of others, drop me a line and let me know.

Win a 1-month membership to Audible.com

So Others May Live Giveaway: 1- month Audible Membership https://widget.gleamjs.io/e.js