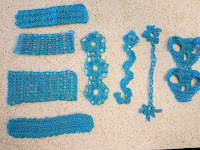 Saturday I had a plan which changed.  My plan was to get a bunch of book work done.  When I was playing one of my games, I got several hours of free play.  So instead of being responsible, I played on my phone until my middle daughter and a friend showed up to go craft shopping.

I was reluctant – yes, I know but true.  I felt like I had too much to do to wander a craft store or two.  I went and in the first store we were wandering.  I got some Christmas stuff to decorate my mom’s room in the nursing home.  I also found a Christmas present for my oldest daughter.

At one point, I was by myself in the yarn aisle.  I texted my youngest daughter and she said it was dangerous.  I was good and didn’t buy any yarn in that store.

In the second store, I wandered off to the yarn aisle by myself again.  I found the colors and type of yarn I was looking for.

In both stores, I was able to get a lot of great deals.  The Christmas stuff was half off and I had a coupon for 40% off the other item.  At the second store, I had a 50% off coupon for one item and then a 20% off coupon.  By the time I was done, I saved more than I spent.  In the second store, I got three skeins of yarn and with my coupons, the third skein was free.

The rest of the day was spent crafting, cutting out fabric, prepping projects and crocheting.  I spent most of Sunday (after doing the responsible stuff) crocheting and watching tv.  After all the drama and stress with dealing with my mom’s health issues, it was nice to hibernate in my house and do something which de-stresses me.

I finished one project for a Christmas gift and worked on more prep stuff for other gifts.  I’m happy with my progress on the projects even as my living room is a bit crowded with projects.  I really needed a crafting weekend to help reduce the stress.