It’s mother’s day and all my kids are out of state.  I’m okay with that.  For one thing, they were home last weekend.

Yesterday Ken and I went to a yarn shop Vicki discovered.  It was an interesting experience in that I was lucky to be able to get in the store.  There was a ramp leading up to the second floor and a locked door.  The ramp itself was damn scary as I could hear the boards moving as I rolled over each of them.  Ken ended up going in to ask if there was a way in.  Of course there was – up the ramp and through the locked door.  When we got there (finally) the ramp was about 4 inches below the door.  I couldn’t just roll into the building.  I had to get off my scooter and lift it up.  It’s a good thing I’m still mobile and not completely wheelchair bound.

The yarn shop was small but had a large selection as well as an interesting selection of gadgets.  However, the cost of the yarn was over the top.  I didn’t see anything under $5.75 and these were tiny skeins (probably about an ounce).  Some of the yarn was amazing but the cost ranged from the $5.75 to $40 (or more).  Most of it seemed to be specialized yarn but to me this is just too costly to spend money on.  I mean an afghan can sometimes take up to ten or more skeins.  That is a crazy amount of money to spend to make an afghan.

I did get a crochet hook with stuff on the handle.  It is supposed to help ergonomically with hand issues.  I bought one and I’ll try it.  If I like them and it helps with the cramping I can get I’ll think about getting a set.

Another thing I noticed was a ball holder.  Basically, the piece was two wooden plaques separated with a turntable.  In the center of the top one, a dowel was placed.  You place your skein on the dowel and then can pull from the outside.  It should (hopefully) prevent tangling of skeins.  They were asking $30 for one.

I like the idea a lot but not the cost.  Ken was with me so I asked – Can you make something like this?  His answer was sure.  He is making one this morning for me and I can’t wait to see how it turns out.  He got the materials from Menards for $20 and will be able to make two for that cost.  If they work out nicely, I’ll be asking for some more.  Vicki will probably as well as she has been doing a lot of knitting.

There was one other gadget there which was essentially the same thing except without the turntable.  They had several skeins of yarn on a dowel which was in the center of a wooden plaque.  I could see how that would be useful when I’m working with multiple colors, I could put them all on the dowel and just pull the ends to crochet with.  I’m hoping I can talk Ken into making me one like that as well (though it being on a turntable would be nicer I think). 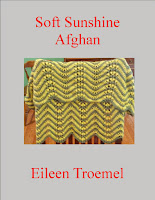 When I’m done with this blog I’ll be going back to crocheting.  Last night I listened to Promises in Death while I worked on Virginia’s afghan.  I got about twenty rows done on her afghan.  I sent her a picture and told her if she didn’t like it I could keep it.  I think if she had been closer, I would have gotten a smack.  It is turning out BEAUTIFULLY.

This morning I published one more crochet pattern.  I’ve had it done for a while but had to wait until after my niece’s wedding as it was her gift.  Soft Sunshine Afghan is now available on Smashwords and Amazon.
http://www.smashwords.com/books/view/541758
http://www.amazon.com/dp/B00XGOA50W

It’s been a busy Mother’s day and next is going to be more crocheting on Virginia’s afghan!