Alan M. Clark’s Jack the Ripper Victims Series is comprised of five novels, one for each of the canonical victims of the murderer. These stories are not only meant to appeal to those interested in the horror that was the Autumn of Terror, but also those interested in the struggles of women in the 19th century. They are well-researched, fictional dramatic stories meant to help readers walk in the shoes of the victims and give a sense of the world as each of the women may have experienced it. The timelines for the stories run mostly concurrently, so it doesn’t matter in what order the books in the series are read. They are simultaneously drama, mystery, thriller, historical fiction, and horror. They are novels concerning horror that happened. 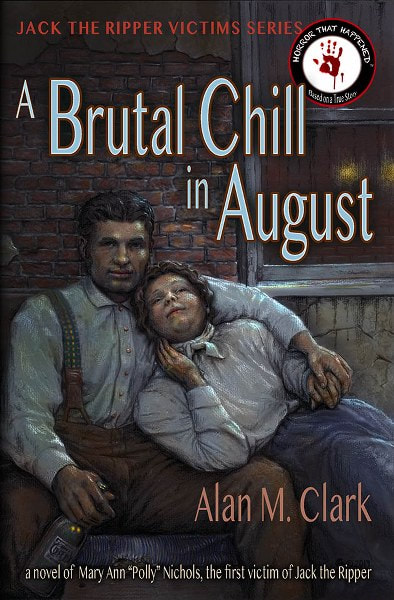 We all know about Jack the Ripper, the serial murderer who terrorized Whitechapel and confounded police in 1888, but how much do we really know about his victims?
Pursued by one demon into the clutches of another, the ordinary life of Mary Ann “Polly” Nichols is made extraordinary by horrible, inhuman circumstance. Jack the Ripper’s first victim comes to life in this sensitive and intimate fictionalized portrait, from humble beginnings, to building a family with an abusive husband, her escape into poverty and the workhouse, alcoholism, and finally abandoned on the streets of London where the Whitechapel Murderer found her.
With A Brutal Chill in August, Alan M. Clark gives readers an uncompromising and terrifying look at the nearly forgotten human story behind one of the most sensational crimes in history. This is horror that happened.
Add to Goodreads
Amazon * Apple * Apple Audiobook * B&N * Kobo
Music Video
The song sung by the ghost that haunts Mary Ann “Polly” Nichols
https://youtu.be/NQGvZ6arwv0
[youtube https://www.youtube.com/watch?v=NQGvZ6arwv0] 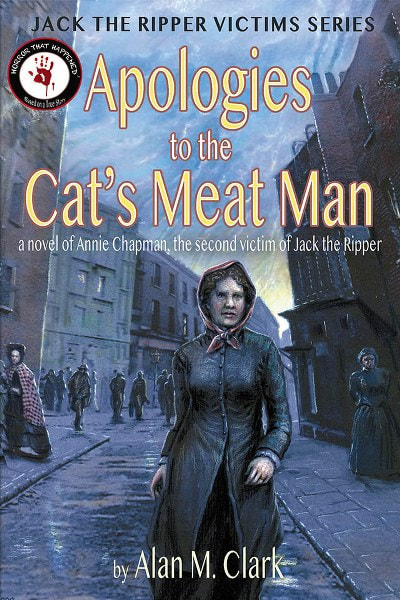 Apologies to the Cat’s Meat Man
The Second Victim of Jack the Ripper
Publication Date: June 9, 2017

This novel is part of the Jack the Ripper Victims Series. Each novel in the series is a stand-alone story.
Annie Chapman led a hard, lower class life in filthy 19th century London. Late in life, circumstances and and her choices led her to earn her crust by solicitation. After a bruising brawl with another woman over money and a man, she lost her lodgings and found herself sleeping rough. That dangerous turn of events delivered her into the hands of London’s most notorious serial killer, Jack the Ripper.
Contrasting her last week alive with the experiences of her earlier life, the author helps readers understand how she might have made the decisions that put her in the wrong place at the wrong time
Add to Goodreads
Amazon * Apple * B&N * Kobo
Book Trailer
https://youtu.be/oDKsC9KJ3RI
[youtube https://www.youtube.com/watch?v=oDKsC9KJ3RI] 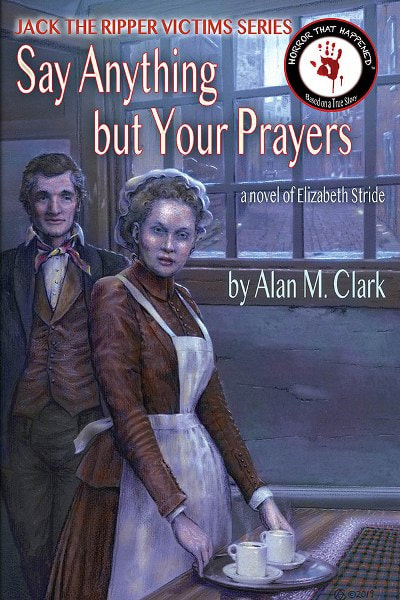 Say Anything But Your Prayers
The Third Victim of Jack the Ripper
Publication Date: June 11, 2017

This novel is part of the Jack the Ripper Victims Series. Each novel in the series is a stand-alone story.
An imaginative reconstruction of the life of Elizabeth Stride, the third victim of Jack the Ripper. The beast of poverty and disease had stalked Elizabeth all her life, waiting for the right moment to take her down. To survive, she listened to the two extremes within herself–Bess, the innocent child of hope, and Liza, the cynical, hardbitten opportunist. While Bess paints rosy pictures of what lies ahead and Liza warns of dangers everywhere, the beast, in the guise of a man offering something better, circles ever closer.
Add to Goodreads
Amazon * Apple * B&N * Kobo 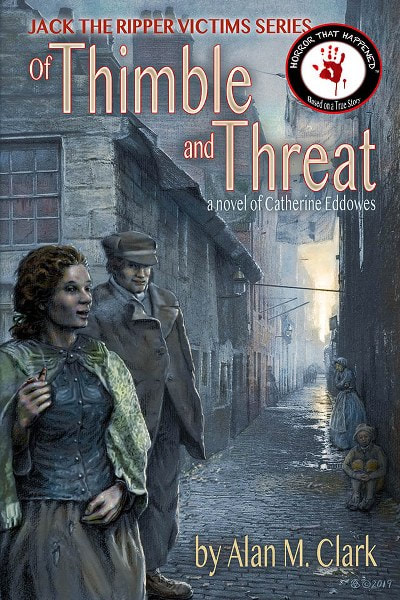 Of Thimble and Threat
The Fourth Victim of Jack the Ripper
Publication Date: September 28, 2017

In Victorian London, the greatest city of the richest country in the world, the industrial revolution has created a world of decadence and prosperity, but also one of unimaginable squalor and suffering. Filth, decay, danger, sorrow, and death are ever-present in the streets. Catherine Eddowes is found murdered gruesomely in the city’s East End. When the police make their report, the only indicators of her life are the possessions carried on her person, likely everything she owned in the world. In Of Thimble and Threat, Alan M. Clark tells the heartbreaking story of Catherine Eddowes, the fourth victim of Jack the Ripper, explaining the origin and acquisition of the items found with her at the time of her death, chronicling her life from childhood to adulthood, motherhood, her descent into alcoholism, and finally her death. Of Thimble and Threat is a story of the intense love between a mother and a child, a story of poverty and loss, fierce independence, and unconquerable will. It is the devastating portrayal of a self-perpetuated descent into Hell, a lucid view into the darkest parts of the human heart.
Add to Goodreads
Amazon * Apple * B&N * Kobo 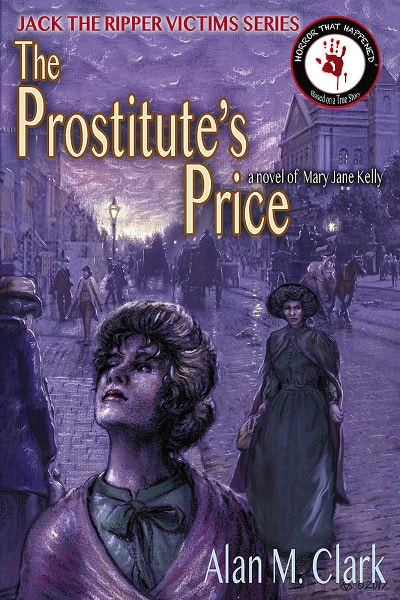 The Prostitute’s Price
The Fifth Victim of Jack the Ripper
Publication Date: August 30, 2018

A novel that beats back our assumptions about the time of Jack the Ripper. Not the grim story of an unfortunate drunken prostitute killed before her time, but one of a young woman alive with all the emotional complexity of women today. Running from a man wanting her to pay for her crimes against his brother, Mary Jane Kelly must recover a valuable hidden necklace and sell it to gain the funds to leave London and start over elsewhere. Driven by powerful, if at times conflicting emotion, she runs the dystopian labyrinth of the East End, and tries to sneak past the deadly menace that bars her exit.
Although THE PROSTITUTE’S PRICE is a standalone tale, and part of the Jack the Ripper Victims Series, it is also a companion story to the novel, THE ASSASSIN’S COIN, by John Linwood Grant. The gain a broader experience of each novel, read both.
Add to Goodreads
Amazon * Apple * B&N * Kobo
Book Trailer
https://youtu.be/9h3V9kVL2Ko
[youtube https://www.youtube.com/watch?v=9h3V9kVL2Ko] 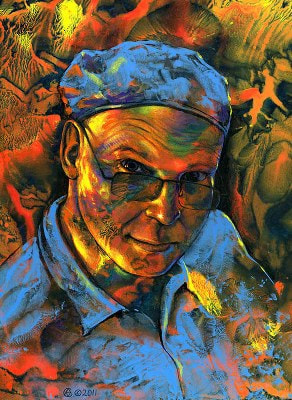 Author and illustrator, Alan M. Clark grew up in Tennessee in a house full of bones and old medical books. His awards include the World Fantasy Award and four Chesley Awards. He is the author of seventeen books, including twelve novels, a couple of novellas, four collections of fiction, some of them lavishly illustrated, and a nonfiction full-color book of his artwork. Mr. Clark’s company, IFD Publishing, has released 42 titles of various editions, including traditional books, both paperback and hardcover, audio books, and ebooks by such authors as F. Paul Wilson, Elizabeth Engstrom, and Jeremy Robert Johnson. Alan M. Clark and his wife, Melody, live in Oregon. www.alanmclark.com Visit his blog: https://ifdpublishing.com/blog
Website * Blog * Facebook * Facebook * Instagram * Amazon * Goodreads

In A Parliament of Crows, the three Mortlow sisters are prominent American educators of the nineteenth century, considered authorities in teaching social graces to young women. They also pursue a career of fraud and murder. Their loyalty to one another and their need to keep their secrets is a bond that tightens with each crime, forcing them closer together and isolating them from the outside world. Their ever tightening triangle suffers from madness, religious zealotry and a sense of duty warped by trauma they experienced as teenagers in Georgia during Sherman’s March to the Sea. As their crimes come back to haunt them and a long history of resentments toward each other boils to the surface, their bond of loyalty begins to fray. Will duty to family hold or will they turn on each other like ravening crows?
Add to Goodreads
Amazon * IFD Publishing

Alan M. Clark grew up in Tennessee in a house full of bones and old medical books. As a writer and illustrator, he is the author of sixteen published books, including 11 novels, a lavishly illustrated novella, four collections of fiction, and a nonfiction full-color book of his artwork. His illustrations have appeared in books of fiction, non-fiction, textbooks, young adult fiction and children’s books. Awards for his work include the World Fantasy Award and four Chesley Awards. Mr. Clark’s company, IFD Publishing, has released 42 titles of various editions, including traditional books, both paperback and hardcover, audio books, and ebooks by such authors as F. Paul Wilson, Elizabeth Engstrom, and Jeremy Robert Johnson.
Website * Facebook * Facebook * Instagram * Amazon * Goodreads