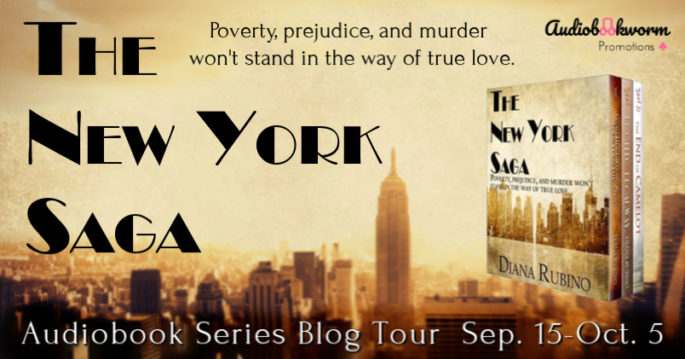 It’s 1932. Prohibition rages, the Depression ravages, and Billy McGlory comes of age whether he wants to or not. Musical and adventurous, Billy dreams of having his own ritzy supper club and big band. On the eve of his marriage to the pregnant Prudence, the shifty “businessman” Rosario Ingovito offers him all that and more. Fame, fortune, and his own Broadway musical – it’s all his for the taking, despite Pru’s opposition to Rosie’s ventures. Meanwhile, Pru’s artistic career gains momentum and their child is born. Can anything go wrong for Billy? Only when he gets in way over his head does he stop to wonder how his business partner really makes his millions, but by then it’s far too late….

Diana Rubino writes about folks through history who shook things up. Her passion for history and travel has taken her to every locale of her books, set in Medieval and Renaissance England, Egypt, the Mediterranean, colonial Virginia, New England, and New York. Her urban fantasy romance, FAKIN’ IT, won a Top Pick award from Romantic Times. She is a member of Romance Writers of America, the Richard III Society, and the Aaron Burr Association. When not writing, she owns CostPro, Inc., an engineering business, with her husband Chris. In her spare time, Diana bicycles, golfs, does yoga, plays her piano, devours books, and lives the dream on her beloved Cape Cod.

Nina Price is a Renaissance woman: a conservatory trained musician, a Silicon Valley businesswoman, a radio personality, a licensed acupuncturist and master herbalist, and a voice actor/storyteller. She especially loves books with an element of history in them: historical novels, memoirs, biographies, although she’s narrated books in many genres. Born and raised in New York, the characters and places in the New York Saga are very familiar to her, and dear to her heart. She loves to travel the world and listen to the way people speak English.

I received this audiobook as part of my participation in a blog tour with Audiobookworm Promotions. The tour is being sponsored by Nina Price. The gifting of this audiobook did not affect my opinion of it.