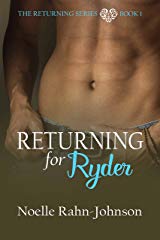 Noelle and I started talking on social media and we have a lot in common including a nearly similar book title! She’s from the Midwest and so am I!

Noelle currently lives in Northern Minnesota with her husband, their four children, two dogs, two rats, a handful of goldfish, and a very spoiled cat. She spends most of her days puttering away on the keyboard with a breathtaking view of a lake in her backyard as a source of tranquil inspiration. Her and her husband were high school sweethearts, and will be celebrating their 25th year of wedded bliss in August of 2017. She enjoys fishing, reading, shopping, writing, and spending time with her family.

Well, I’m a married, mom of 4 with a granddaughter. I’ve been writing since 2014, but didn’t publish my first book until 2015. I currently have 9 books out and writing 2 at the same time currently. I live on a lake in northern Minnesota with my hubs of 25+ years, 2 kids, 2 dogs, 2 cats, 6 pet rats and a handful of fish.

I didn’t know I wanted to be an author. I just had an idea of a story one day and wrote it down. It became the Pieces Trilogy and I just haven’t stopped since.

I’m a romance freak. Any HEA romance except for historical, I’m good. I write what I read. Contemporary, shifter, vampire, NA/College. 18+, I like it steamy but not over the top.

My books are all 18+ because of the language and sexual scenes. But they are not erotica or 50 shades. I have written a child’s book, but I’m waiting for some more money to come in so I can get the illustrations done.

The last book I did release was Secrets Past. I’m currently writing Hidden in the shadows which is book 2 in the Shadows series AND The Queen’s Justice, which is a stand alone.

Well, in Hidden in the Shadows there is Samuel who is a skinny red head and a red macaw shifter. Jamison is a silver backed Ape in Remote Oregon. They meet under different situations and there is sex, drama and love.

Squatting on the forest floor, hidden behind and under the tall, thick ferns, Jamison watches as a red macaw flies and dodges trees, scrambling away from two other macaws chasing him.

When the red bird miscalculates his turn, and flies head on into a tree, the other two birds squawk and fly away.

Jamison lumbers over to where the injured bird lays. Seeing that the bird may be injured, he carefully picks it up with his huge, thick hands and cradles it into his massive chest. He brings it to his home to take care of it until it heals.

When Sam wakes, he’s no longer in the forest trying to get away from the aggressive female and male shifters. But now he’s lying on a soft leather couch. In someone’s home.

The female and her boyfriend wanted a three-some, but Sam’s not bi, he’s totally GAY!

He knows he won’t have children the normal way, but adopting isn’t out of the question. Sam’s lived his adult life alone. His parents abandoned him when he came out to them as gay. And that didn’t sit well with their flighty and all-mighty life style.

Will this lumbering, muscular, dark chocolate skinned, shifter of a man want him?

Could the hulking man want more than just him and a roll in the leaves?

Will their animal shifter be accepting of each other?

One flying and the other a chest pounding, beefy shifter?

I’ve lived on the very outskirts of this town called Remote, Oregon for all my adult life alone. For three reasons only-It’s beautiful, private and quiet. Those three things alone make it worth my while, but also my animal can go ape wild if he wants too and we don’t need to worry about humans interfering. My beast doesn’t like being alone, but I can’t help that.

There are a few shifters in this area, but we pretty much keep to ourselves. Shifters are all over the world, not just where their animal is originally native from.

I live in a small two-bedroom one-bathroom rustic cabin home. I have wood to burn for heat, and a small heater in my bedroom for those freezing cold nights when my balls are about to fall off. I have electric and running water, so I’m not too far off the grid, but I do like my peace and quiet. And my small home is right on the edge of the forest and mountains.

Currently, I’m in my animal form munching on the berries I love so much, and my huge sausage looking fingers squish a few, so I lick the berry juice off them. I drop a few as I’m startled by a loud squawk and a few screeches coming from somewhere in the upper boughs of the massive pine trees. I’m sitting here in the depths of the forest, forced to listen to the constant squawking of the damn birds flying overhead.

Not yet. I’m only about 12,000+ words into the book, but it’s already getting interesting.

Don’t give up on your writing. Stay writing one book at a time or you’ll never finish. Promote, promote promote!! If you wont do it, it wont sell. If you have questions, ASK them!! Nothing is stupid if you don’t know the answer to it.