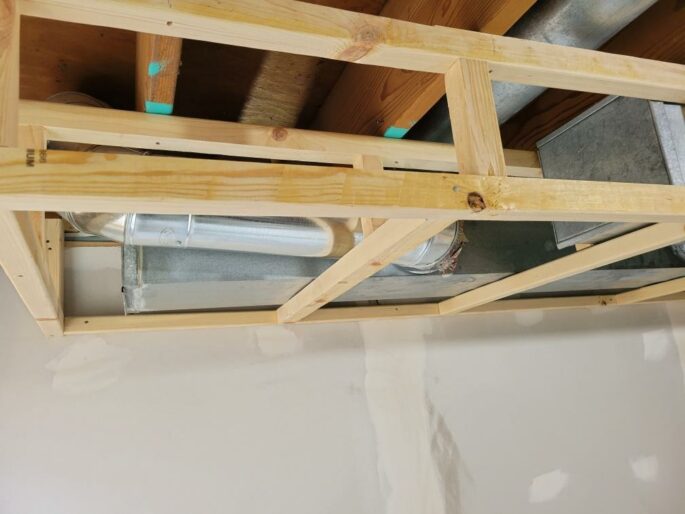 I just reread the first post I did and laughed. Back in May I hoped to be done by the end of the month. Well that didn’t work. It’s now almost the end of June. We’ve made a lot of progress. Drywall is up in all three rooms and as of today, the ceilings all have drywall (though I don’t have pictures of that yet).

The next step tiling. Now Vicki’s done tiling but never on this scale. So a friend of hers does floors – including tile floors – and he agreed to drive down (he lives a couple hours away) and do the floor for us. In the wet room the floor has to be slanted so it’s easier to use a small tile. Vicki picked a small purple circle tile. Then in the main floor of the bathroom, she picked a gray – looks like storm clouds – 12″ x 12″ tile. She opted for gray grout except she wanted something special. He came down and worked for three days. I made him and his wife each a blanket as a special thank you.

As you can see (sorry about the blurry – I didn’t take the picture) in the grout she asked him to add in glitter. He didn’t think it would work. He thought the gray would overwhelm it but there’s a hint of it throughout the flooring.

Next we had to tackle the walls. Now our flooring guy said – no he does not do tiling on walls but he offered advice and suggestions. We had to wrap the whole wet room in a membrane. This is to add a protective barrier between the tiles / grout (in case the grout goes bad or you get a cracked tile) and the drywall behind it. It’s to prevent mold – which is a good thing.

Ken built four niches into the wall for stuff – like shampoo bottles and such – those also had to have some sort of barrier but we got a system – which here I fail. I don’t have pictures of just the niches. Essentially you buy a kit (or we did) and you follow the directions so there’s water proofing in the niches area.

We were supposed to have help but unfortunately, they had medical issues and couldn’t make it. So we had to decide – wait or keep forging ahead. If you know me, my husband, or any of my daughters, you know we’re pretty damn stubborn and determined. So Vicki got down on the floor and started tiling. The tools were too big for her hands – why don’t they make them with smaller handles? Hey manufacturers of tools – there a whole marketing niche to make tools with smaller handles for smaller people!!! Not to be stalled by this, my daughter used her hands. She smoothed the thinset on the tile and the wall, used the thingy with the too large handle to create the grooves (I am so out of my depth here) and slapped the tiles up. The first day, she and Ken got one wall done.

While they were working on they worked on that, a friend also worked on priming the bedroom walls. Now one wall hadn’t been completed for mudding and sanding so she did three and a half walls. She got two coats on the walls. While I think I was sent a picture, I’m not showing it because… well white on white… you can’t really tell.

Vicki was covered in hives after doing this one wall so my husband took over and he got the other two walls of tile up.

So tile up! Niches still needed doing. Vicki watched a YouTube video and explained to her dad what he had to do. They discussed and there was some talk about waiting until Vicki could do but Ken tackled it on his own. At the top of the walls there was a small area which one of the 12″x24″ tiles wouldn’t fit. They determined it would be too hard to cut the bigger tiles – remember this is their first time doing this. So Vicki had these little gray circle tiles and they are at the top of the walls and around the outside of the niches.

Tile up on the walls and next step grouting. Again, first time doing this… Ken will have to clean out the thinset from the lines between the tiles – see them? They are fucking small. We bought yet another tool to do this. He’s probably tackling it tomorrow.

In addition to the tiling which was a challenge, Ken’s been working on other things. Including getting the drywall on the ceilings. One of his challenges was hvac stuff (pipes? vents? whatever) So he had to build a soffit around the one and then drywall it. Now the biggest problem – Vicki wanted a barn door for her bedroom door. If Ken built the soffit and drywalled it, there was no way she was getting a barn door… so sad to say, she nixed the barn door.

As you can see, ceilings are up and he covered the soffit with all the hvac crap in it. We had to go buy a drywall lift (that’s the yellow thing in the last picture). The drywall lift was expensive but looking at the ceilings and the fact it made it so Ken could do the ceilings by himself – it was worth it. But post reno – we’re probably going to sell it… maybe…

Seems like a lot to accomplish but this last weekend, Vicki also got paint on her walls and Ken got the bathroom painted. He still has ceiling to do but the walls are done.

So in case you didn’t notice, the bedroom walls aren’t painted to the ceiling. That’s for two reasons – first Vicki is short and she paints with a brush. It’s easier on her hands and she likes it better that way. Second, Vicki is a klutz. Ladders – no go for her. She will fall and hurt herself. She’s got one coat on three and a half walls.

Bedroom – painting, install window frame, and then floors – doesn’t sound like much but it is.

Closet – so this one is complicated. Once the bathroom is installed – i.e. the big ass soaker tub is carried through the closet, Ken will close up the doorway and build the wall. Then there will be drywall, mud, sanding, painting all around – ceiling and walls, install the closet unit.

Once the ceiling is up in the living room, we’ll have the electricians back to finish the job. That will probably come before the move and the cleaning but who knows…

At this point, I’m hoping for end of July to be done but the reality is – we may never be done.