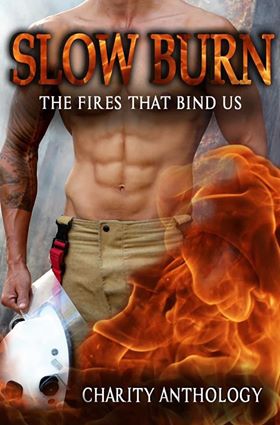 Fiona Fairhame and I both wrote for the same anthology – Slow Burn. Her stories sound sexy!

Fiona lives in the mountains of western North Carolina in the United States with her husband. They both love dogs, but do not have any currently. Instead, they spoil their youngest nieces and nephews – or would if they lived closer. Fiona’s husband is both a writer and a game designer.

I’ve been reading for as long as I can remember. I supposedly taught myself how to read at 3 years old by getting someone to read me the same story over and over again until I memorized it. I also learned to recognize all the words in the book that way and could mostly read other books within the week. I just needed help with the few words I didn’t recognize from the first book. I must have been bored; I was an only child after all. (I’m still an only child.)

I read a lot, though not as much as I used to. Once upon a time, I read several books a week. Now, I do good to read one or two a week. I’m spending more time writing my own stories and working on various craft projects now.

I wrote my first story all the way back in first grade. It won some county-wide award. I’ve been hooked ever since.

I have stopped writing a couple of times over the years, but I always come back to it.

I read a little bit of everything. Recent reads including history, politics, a psychological thriller, an historical romance, a science fiction romance, and an urban fantasy series.

Adults. If it has the name Fiona Fairhame on it, it’s definitely for adults.

In addition to the short story in the Slow Burn anthology, I will be releasing a free short story around the middle of the month called “How to Tempt a Coach”. It will be the first story in the loosely-connected Temptations series I am planning with a couple of author friends.

“Souls Ablaze” is my story in the Slow Burn anthology. The main characters are a female firefighter from Sydney, Australia and a male elven mage from an unknown world.

“How to Tempt a Coach” features a female student at a community college and a male coach who teaches at the same college.

Souls Ablaze: A female firefighter gets pulled into a parallel world where she meets an elven mage who claims she is his soul mate.

How to Tempt a Coach: A female college student and a physical education teacher at said college have crushes on each other even though they’ve never met. When they do finally meet, the chemistry between them is explosive.

(From “How to Tempt a Coach”. Unedited.)

I’ve never been the type of girl to develop a crush on a teacher– until now. Thankfully, he’s not my teacher. And this is a community college, so we’re both adults. I’m not entirely sure how old he is, though my guess is late 20s, making him about eight, maybe ten, years older than me. Not ideal, but not a deal breaker either.

If you could see him, you’d understand. He is hotness incarnate. The first time I ever saw him, he was shirtless. I wanted to jump him then and there. Unfortunately, it was in a parking lot that I saw him. Or maybe that was fortunate? Either way, I’ve never felt like that before: an immediate, intense attraction. It scared me, but also excited me.

Unless, of course, that change is for us to actually get together. Or even meet. That would be nice. Vicki – my best friend and future sister-in-law – offered to introduce me to him; she was in one of his classes last year while I was off at university.

I do at least know his name: Erik Bryant. I had to ask for his first name; Vicki just kept saying Coach Bryant. She teases me about my crush sometimes, but it is only fair. I teased her enough for her crush on my older brother over the years. Now they’re engaged. I didn’t even know they were actually, finally, together until that happened.

He proposed to her at our family’s Memorial Day picnic. No one was surprised when she accepted; we all knew it was inevitable.

In a way, I’m jealous of her. She’s known for years who she would end up with. It just took Elias a while to figure it out. At least he didn’t try to fight it.

I don’t know, maybe I should let her introduce me to Erik. I’m not sure how I’m going to meet him otherwise. I’m not brave enough to just walk up to him and introduce myself. I just know I would trip over my own tongue if I tried.

Guess I’ll talk to her about it during lunch. We have lunch together the three days a week our class schedules – and her work schedule – cooperate. Today happens to be one of those days. I’ll need to head to the student center soon; that’s where we have lunch, the little cafe in the student center. I’ve been in the library for almost two hours to work on homework, but I’ve spent the last half hour spacing out instead of getting anything done.

Why? Becuase I just happened to glance out the window at the wrong time. Or maybe the right time? Either way, I saw him, leading the class he’s teaching on a hike or something. He was already shirtless, so my brain hasn’t functioned quite right since. I need to run my hands over those muscles. Then my tongue.

I groan and close my laptop. I’m obviously not going to get anything else done. I pull out my phone to check for texts and the time. Vicki’s in class for another ten minutes, but I think I’m going to head to the cafe anyway. Maybe I’ll actually be able to get us a booth for once. There’s never one available when we usually get there, right in the middle of the lunch rush.

Also, leaving this early, I might get to see him again. Maybe I’ll even have the guts to speak to him. Doubtful, but maybe. A girl can hope.

I pack up all of my things and head out of the library. I do catch a glimpse of Coach Bryant.

He smiles at me and I blush and duck my head.

Yeah, definitely not speaking to him. This is the closest look I’ve had at him and he is even more handsome than I first thought. No wonder my brain’s frazzled.

Not really. I like all of the scenes in both stories that will be released this month.

Write. Write a lot. You will suck at the beginning, but you will get better with practice. Get plenty of practice and write, write, write!

The first draft is for getting your ideas down, figuring out where the story goes. No one else has to see it, so it doesn’t have to make sense to anyone but you.