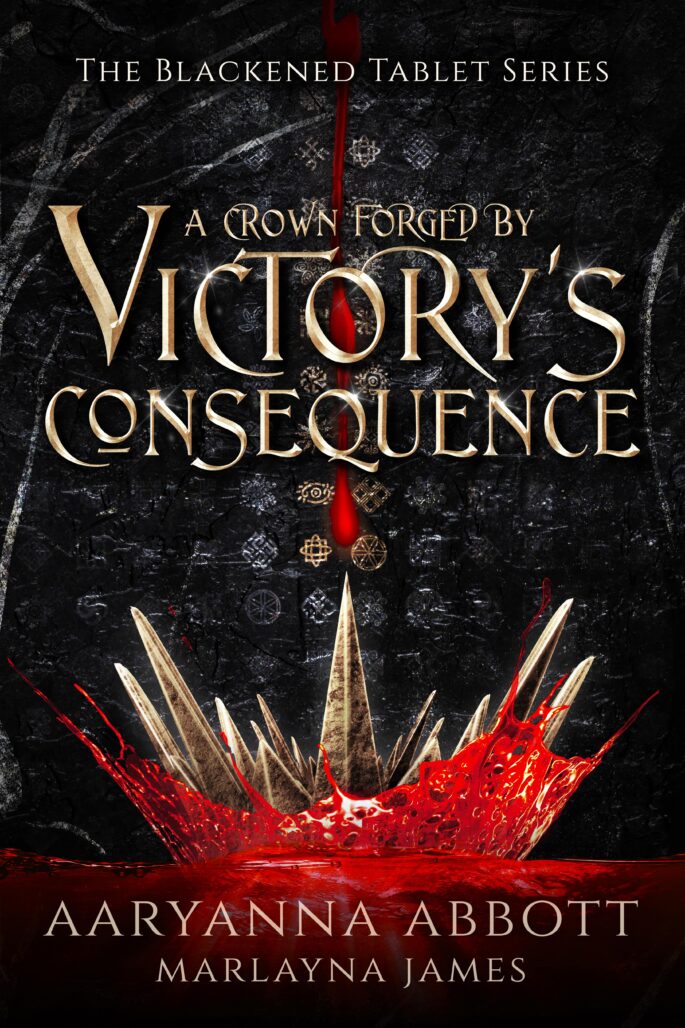 I’m a video game junkie from Canada. WoW, CoD, and Witcher are a few of my favourites. I love Downunder TV shows. My addiction is Offspring—I highly recommend it if you like character depth. I enjoy gardening, preserving, survival camping, and music.

When I was 6 or 7 years old. I glued a bunch of paper together into a booklet and wrote a book talking vegetables in a supermarket.

Give me Romance—it’s my favourite. I think every book I write has romantic elements but Annora writes erotica, Aaryanna writes fantasy, Achelle writes women’s fiction, and I write romance. I bridge all my pen names with Marlayna James listed as a co-author on every book.

Very adult—Dark Fantasy. I think it will appeal to women most, but I believe if given the opportunity men wold also enjoy it.

A Crown Forged By Victory’s Consequence is Book I of The Blackened Tablet Series. It is a Dark Fantasy with a stand-alone quest arch as well as a series quest arch. It includes coarse language, explicitly detailed romances, violence, and too many trigger warnings to list. This story came to me when I was 12 or 13 years old and it is only now that I am putting it to paper.

The key characters—that’s a doozy of a question. The cast in this series is huge—think Game of Thrones or Harry Potter.

Crowned Prince Aedyn of Aldersward is our main character. Looks like Ian Somerhalder. He wants readers to know what the downfalls are of being royalty. Because in truth, there are many more downsides than advantages.

Lead Auren of Maidstone is Aedyn’s best friend. He resembles Stephen Amell. He’s a sucker for women. A real ladies man who knows he’s sexy, and is in a constant state of lust. This often gets him into trouble, and his situations can be quite comical.

Guard Asa of Lessard is friends with Auren and Aedyn. I don’t have a lookalike comparison. He reminds me of Bashful of the seven dwarfs. He’s youthful looking and wears his heart on his sleeve. He embarrasses easily and when he is the colour rises in his face and his ears turn red. He can be a prankster and quiet goofy when he isn’t facing impending doom.

Emissary Bennet of Baitsloam is the three young friends’ mentor. He looks like William Hurt in Robin Hood. At nearly 800 years old, he is the last surviving member of his race. A trusted advisor to the royal family for generations. He lost his family when the kingdoms on the world of Speranza broke off and sunk into the murky sea. He never loved again and journeys with our three other characters to find out whether his kingdom survived—his wife, his children. He’s my “Bob”—a term used for a character who is present to explain things to the reader.

The Blackened Tablet Series is an epic fantasy quest story with corrupt politics, wondrous magic, and illicit encounters in a supernatural world where no one is safe.

Three hundred years ago, the sacred tablet granted by their god, Jezabet, turned black, and eight kingdoms broke free, plummeting into the bottomless sea. There was no warning, and no one knows why.

Now, a strange illness plagues Aldersward. Crowned Prince Aedyn’s sisters, Achelle and Annora, his father, and countrymen are desperate and grief-stricken. All hope is lost…

Until someone dreams, and Aedyn leaves behind his mistress and his betrothed to cure their nation. He enlists his friends; a brazen playboy, a gentle strongman, and an ancient mentor. Together, they set out on a perilous journey—few believe they will survive.

This isn’t a fairy tale—sex becomes currency, murder is ordinary, and love doesn’t conquer all.

Everyone loves a hero—good triumphs evil. But few dare to question how victory ripples into consequences. Explore this exciting concept in the Blackened Tablet Series.

An excerpt from The Blackened Tablet Series: Book I: A Crown Forged By Victory’s Consequence, written by Aaryanna Abbott and Marlayna James.

Achelle’s hand shook as she flattened several stray hairs in the mirror. She wore her favourite dark purple gown laced with intricate white beading. Once a tight, perfect fit, now hung loose from her pale, washed-out frame. She looked sickly.

Her sunken green eyes found Astrid studying the gown. “I cannot attend my father and his men.”

The summoning bell clanged outside, signalling the evening meal at an hour’s end.

“Princess Achelle, the king ordered it.”

She knew. He had visited at dawn and demanded her company. Attempting to diminish the tonic’s effects, her maid kept her mind clear of substances and fed her dried bread and tea throughout the day.

“Your Highness, I’ll sew the sides together at your back. No one will be the wiser.” Astrid crossed to the wardrobe and removed the sewing box.

This cannot be over soon enough. Achelle settled her hands in her lap. She was weak, and her hands trembled each time she used her utensils or lifted her mug. She received scrutinising looks from her father’s physician, seated opposite her.

Finally, the king invited everyone to the study. When he left without stopping to escort her, she was grateful. She could escape.

As those present left, she lingered, feigning a fascination in a painting across the room. She sought to shift her chair back, but when she stood, weakness struck her limbs, forcing her to brace her palms against the table.

A gentle grip steadied her, and she turned. Physician Axton stood at her side, offering his guidance. She could not refuse and accepted, averting her face from him.

“Princess Achelle,” he wrapped her arm in his and slowly guided her.

The other guests had already disappeared. The hall was empty.

“I know your father appreciated your update from Auren. Though, I wonder if you could quell my curiosity. How many days’ rations are available before they must return?”

Her eyes stared ahead. “Seven.” The lie came easily.

He checked their steps, turning to her. “Your Highness, is this what Auren told you?”

Indignation brought her eyes to his. “Of course. Why would I state it otherwise?”

“Princess, forgive me. I understood when you delivered Auren’s reports to your father, they were verbatim. I didn’t realise you withheld parts.”

He suspected the truth, and defensively, she answered. “I didn’t realise you had a right to question me.” She pulled her arm free and turned to climb the stairs.

“Your Highness, you’re correct,” he caught her arm and said to the back of her head. “However, I wonder how your father would respond if I informed him you’re lying about your dream-walks? And you’ve left our men without guidance to fend for themselves and perhaps die? The tonic you’re taking is dangerous. If others haven’t noticed yet, they soon will. Your weight loss, colouring, and the hollowing of your cheeks are very apparent. I fear your father’s too worried about his sons to even imagine something is wrong with you.”

She turned her cold eyes on him. “The tonic you gave Astrid ran out, and I haven’t received more from you. There’s no danger. You can free your conscience.”

He nodded. “Princess, perhaps then shortly, you can clear yours.”

As a maid stepped into the hall, he left her standing alone beside the stairs

Do you have a favourite scene?

Any of the scenes between Emissary Sahana of Larkburgh and Guard Asa of Lessard are my favourite. The pair are absolutely adorable together—and their arguments/misunderstandings are beyond comical.

I think the most valuable advice I can give someone is; don’t give up. I did. I stopped writing several times before I decided to make this a career, and looking back I wish I hadn’t. The best piece of advice I have ever received was from an image. I don’t know who wrote it, or where it came from, but it said, “You can’t edit a blank page.” I know it isn’t profound, but it’s true. Just write. Don’t think about editing, spelling mistakes, holes in your story. Write it to completion, then when it’s done, go back and worry about those things.

Private. Loner. Writer. I don’t want fame. I want you to feel something.

I sing really well. With music, I’m not picky. I can appreciate all genres—belting them out at the top of my lungs as I drive through town.

I love downunder TV shows. The longer the series, the better. Offspring. A Place to Call Home. McLeod’s Daughters. A warning: they will tear your heart out.

I’m a Buffy fanatic. Watch the series every year from start to finish. I can tell you which episode by only hearing a single line.

I’m the coolest mom—still playing video games, smack talking with the young’uns through my headset. CoD and Witcher are my favourites. Beware, my language can get quite colourful.

I love to read and have an extensive library in my basement—there’s no room for it elsewhere. They are unapologetically smutty romances. Don’t like—don’t look.

I enjoy thrift shopping—especially books. I mean, hours and hours to find a single book. That’s my idea of an incredible day.

Little bits: veggies over candy, vacuums over jewellery, and water over any beverage.

Want to hang out with me or learn more about my books?

Join my VIP reader group on Facebook. It’s where I am the most social : )