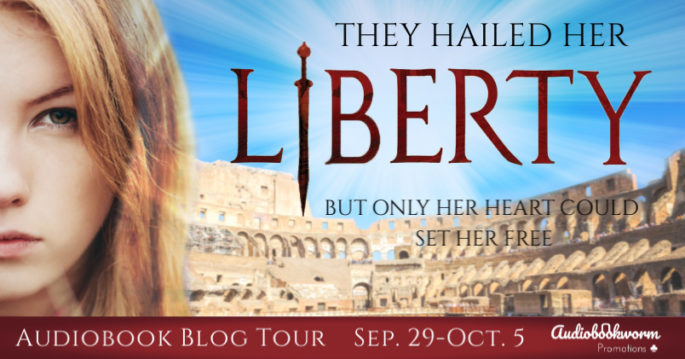 How hard would you fight for a chance at impossible love? From the critically acclaimed, award-winning pen of Kim Iverson Headlee comes the thrilling, poignant tale of love across a vast social divide. Winner of the 2015 International BooksGoSocial Best Book. Betrayed by her father and sold as payment of a Roman tax debt to fight in Londinium’s arena, gladiatrix-slave Rhyddes feels like a wild beast in a gilded cage. Celtic warrior blood flows in her veins, but Roman masters own her body. She clings to her vow that no man shall claim her soul, though Marcus Calpurnius Aquila, son of the Roman governor, makes her yearn for a love she believes impossible. Groomed to follow in his father’s footsteps and trapped in a politically advantageous betrothal, Aquila prefers the purity of combat on the amphitheater sands to the sinister intrigues of imperial politics, and the raw power and athletic grace of the flame-haired Libertas to the adoring deference of Rome’s noblewomen. When a plot to overthrow Caesar ensnares them as pawns in the dark design, Aquila must choose between the Celtic slave who has won his heart and the empire to which they both owe allegiance. Trusting no man and knowing the opposite of obedience is death, the only liberty offered to any slave, Rhyddes must embrace her arena name, Libertas – and the love of a man willing to sacrifice everything to forge a future with her.

Kim Iverson Headlee lives on a farm in southwestern Virginia with her family, cats, goats, Great Pyrenees goat guards, someone else’s cattle, half a million honey bees, and assorted wildlife. People and creatures come and go, but the cave and the 250-year-old house ruins—the latter having been occupied as recently as the midtwentieth century—seem to be sticking around for a while yet. Kim has been an award-winning novelist since 1999 (Dawnflight first edition, Sonnet Books, Simon & Schuster) and has been a student of Arthurian lore for more than half a century. Her novel LIBERTY was a 2007 HOLT Medallion finalist for its first edition (HQN Books, Harlequin, 2006; writing as Kimberly Iverson), and its second edition won the international BooksGoSocial Best Book award in 2015.

Born in the United Kingdom, Lillian grew up in East Anglia and moved north to Durham before marrying my US military man and Atlantic hopping between Europe and North America, with many side trips to far flung countries along the way. She’s now settled in the Washington D.C. area. After reading thousands of hours of literature-based lessons with children, and leading a range of adult education classes, her passion for storytelling and training continues. Lillian now performs behind the mic in projects as diverse as audiobooks to eLearning. There’s not much she loves more than telling your story in the most engaging way.

I received this audiobook as part of my participation in a blog tour with Audiobookworm Promotions. The tour is being sponsored by Kim Iverson Headlee. The gifting of this audiobook did not affect my opinion of it.

Name: Marcus Calpurnius Aquila Age: mid-20s Gender: male Birthplace: Rome, Italia Profession: politician in training Marcus has the body of a football quarterback: muscular but not overly bulky. In present-day terms he tops 6’ in height, 220 pounds, and has a fading tan from having spent the past two years living under the paler northern sun of Britannia Province. He has some minor scars from his arena bouts, but nothing specifically mentioned in the book as being an issue for him.

Enter to win an Autographed Copy of Liberty!