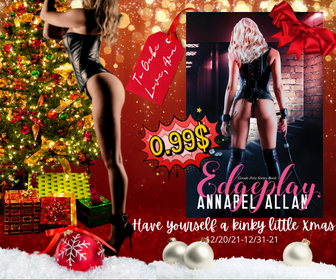 Thank you so much for having me!

I’m a fan of your writing so I’m excited to talk books with you today!  You write under 2 names, please tell me what names and what you write under each.

Which one came first?

I actually started out writing under my mother’s maiden name–so, Stephanie O’Hanlon. But when the publisher I was working with closed their doors, I rebranded and started up with my birth name. Annabel has been around since 2015, so she technically came first!

So horror and urban fantasy for one side of your writing persona – what about those genres spoke to you?

Horror has always been an interest. I grew up watching both quality and low-quality horror movies because of my cousin, who used to babysit me. So, I knew I was going to eventually try to write a horror novel. The urban fantasy was actually a bit of a surprise! I originally was working within historical settings for my vampire romances, but I read the Southern Vampires series (True Blood) and I was like…I can do this! “Fright Club” and the Bite Scene series was born!

Sounds like an interesting journey.  Your Ava Goode series is on my to read list.  I’m looking forward to reading them!  So what shifted you from Male Dom to Fem Dom?

Do you often use music to inspire your stories?

Oh, definitely! I always make a little playlist for each novel when I’m writing. And sometimes while I’m writing, I can hear the soundtrack in my head, hear the music that would play if I was watching it as a movie. Then I obsessively listen to it until I get that scene out of my head.

Tell me about your writing process, please.  Do you plot or just write?  Do you have a specific place you have to be to write?  What starts a novel for you?

What starts the novel is the Muse whispering loudly in my head. When I’m sitting on the couch trying to watch a movie and all I can think about are these characters, I know that’s it. I have to start writing. I then usually do up the first chapter, just to test the waters out. I’m a little bit of a “plantser”–I have recently started doing loose outlines, but leave enough room for me to go off in whichever direction suits the story.

I used to be obsessed with Pinterest! I decided to delete the app because it took up waaaay too much time! Haha. I want to find a way to share playlists…maybe have a portion on my site for it.

Pinterest is a rabbit hole for sure.  Lots of interesting things but easily distracted.  Do you include the playlist in the book?

No, I try to steer away from songs in my books, just because you never know when you’re going to cross a line and have people after you for money. But I do love when books include songs! Like Stephen King’s Christine.

What are you currently working on?

What got you started writing?

I have always been interested in telling stories. I used to play with dolls a lot, using them to tell stories. Then every so often, I would actually write a story down. I always excelled in English-based classes, especially when we were told to write fiction. I never thought about being an author though. My career aspirations were in science until I got to high school and it shifted to film. I went to film school in 2007 and by the end of it in 2008, I realized that I was going to have to fall back on writing…which led me write my first manuscript. Because writing is a rabbit hole too! Haha. You start by writing a short and then that turns into a whole novel.

Are you an observer of your characters or do you feel they tell you their stories?

They definitely tell me their stories. I always say they aren’t my stories I write. I have voice in my head that I need to get down on paper, telling me their own stories.

So who or what has been a big influence on your writing?  Is it books you’ve read or movies you’ve watched?  Or is it something else?

There are two things that have influenced me: one, my grandmother. She used to write children stories for me when I was little, though we also had a book of fairytales she used to read to me also. She instilled a love of books into me. She always had a book in her hands. Second, the late Anne Rice. I read the first three books in the Vampire Chronicles in 2009 and her writing just stuck with me. I always aim to write as beautifully as she did. Then, on top of that, to take risks, like she did with her Sleeping Beauty series.

I always ask this question… what advice would you get someone who wants to write?

I used to say the same old that you should just write, but I actually have a new piece of advice. RESEARCH! And I don’t mean just research for your novel, though that is extremely important too. I mean, if you want to get into writing, want to be successful, research about the publishing industry. I’m not a big fan of the “you’re a writer only if you do this” thing, so you write how you want to write. But researching the business is so, so, so helpful and I wish I had done that back in the day when I started out.

Oh that’s lovely advice!  Thank you for joining me!  I’m excited to see what you write under both names!

Thank you so much!

Want to know more about Annabel Alan? Follow her here: