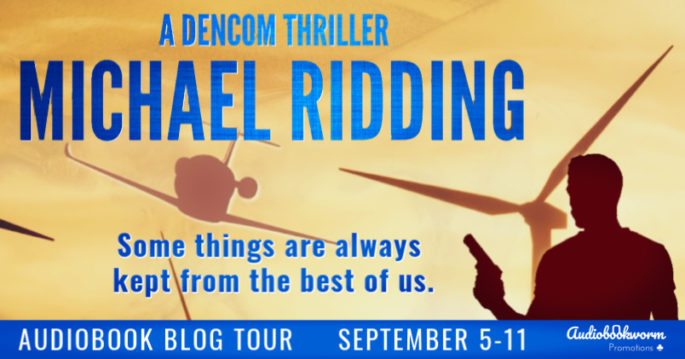 In Southern California, three terrorists of unknown allegiances slaughter dozens of men at a shopping mall. In Denver, the eccentric CEO of Denver Communications, or DenCom, has a target on his head. In the wilds of Greenland, a long-forgotten enemy is reaching out for recognition and revenge. At the center of it all, a special investigator for the “communications” company is dragged into a diabolical plot he can’t begin to understand.

S.T. Hoover was born and raised in Southern California. He enjoys writing books packed with variety and genre-bending plots. His first book, Michael Ridding, is the first volume of a pentalogy meant to serve as the backbone of a shared literary universe. When not writing, he enjoys reading, traveling and researching the next book. He currently lives in Canton, Ohio with his wife Faryl.

I received this audiobook as part of my participation in a blog tour with Audiobookworm Promotions. The tour is being sponsored by S.T. Hoover. The gifting of this audiobook did not affect my opinion of it.

When I set out to write Michael Ridding, I knew people would hate it. That’s a pretty grim outlook, I know. But it was the one I had going in. After years of refining the characters and the universe they inhabit, I knew this series would not be for everyone. While Michael Ridding is, on the surface, a thriller novel, there are bigger things at work that have been in motion since before DenCom was even on my radar. Going in, I knew one thing: This was a thriller novel that would not follow the rules. It would lay the groundwork for bigger and stranger things than I’ve seen in the genre before, and I knew that, pass or fail, it would upset readers in one form or another. There is a promise made between an author and a reader when the cover is cracked: I’ll tell you a story. A safe story. One you’ve probably heard before, but it will pass the time. I knew I could never make that promise. So, I’m not shy about saying this book isn’t for everyone. It wasn’t meant to be for everyone, and I doubt most of my books ever will be. If you enjoy the ride, great! Michael is straightforward enough that most readers will have found my warnings unnecessary. But this is just the start of the journey. We’ll be passing some odd attractions along the way and making more than a few unforeseen stops. If you know that going in, then I welcome you aboard. Buckle up.

Stephanie came home on Thursday.  Ken, Stephanie and I went to Paint Nite and had a good time.  It was a long day for all of us but particularly Ken.  Stephanie spent the morning with Ken while I worked.  They came to pick me up and we all went to lunch with Beth.  She and I went to Joann’s and did a bit of shopping.
She went to visit friends in Ripon.  Which left Ken and I to our own devices.  We caught up on tv shows and I worked on prepping a bunch of fleece I’d bought.  I have about half of them prepped now.  Last night I started a throw for my oldest daughter which I hope to finish today.  I have a blanket for Stephanie which I want to finish before she goes back to Georgia.

It’s the first week of registration where I work.  This means I’ve been working longer hours and my legs are swollen and sore.  I’ll be spending most of today in the recliner and crocheting.  I’m hoping to get a number of projects done.  Work has been incredibly busy and a bit too stressful so this weekend is about being mellow.

With the terror attacks in Paris, I’m hoping Stephanie has no problems flying back on Monday.  Like most of the world, these baffle me.  If you don’t want to be alive and feel the need to take your own life, do it but don’t hurt or kill others.  It doesn’t make sense but then again, I’m not a disenfranchised person involved with a terrorist group.

Since my gout is flaring again, I’m going to spend my weekend being as quiet and calm as possible.  I’m going to enjoy my daughter being home and spending time with her as much as possible.  This means I’m doing things I like to do and trying to shut out the chaos of the world and the frantic pace of my job.

I can only hope some semblance of sanity returns to the world.  My job will be crazy for another couple of weeks before it calms down a bit.  While it is so stressful, I’ll be crocheting and relaxing as much as possible.