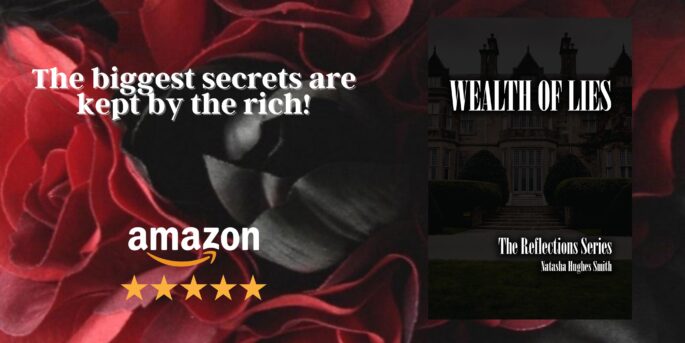 Wealth of Lies is the prequel to the suspenseful romance thriller, Reflections. John Barrington (Reflections) told Jeff (Reflections) that the history and wealth of his family were built on a foundation of lies. Some secrets went to the grave of John’s father, Bernard. During John’s childhood, Bernard Barrington, was distant and he never knew why. Even finding the love of his life, Josephine, couldn’t prevent the path that lay before Bernard. In this novel, you find out what lies laid the foundation of the family and how those lies rippled across time to affect the lives of the Barrington clan.

Boxed in, trapped and caged were all of the ways Josephine, a seamstress, felt her mother wanted to keep her. Josephine Epstein would not live the life her mother wanted her to, nor would she allow anyone to deny her the love of her life, Bernard Barrington. He came from a world of privilege and wealth. Josephine came from a world of hard work and deception. Little did they know that both of their lives had been shaped by their family secrets. But neither would be bound by them.

As Josephine navigated the world of her former high school peers, she saw, all too well, what her mother was denied. But she was not her mother; she wouldn’t be denied. Wealth, prestige, respect and Bernard would all be hers. But at what cost?

This story merges the worlds of the working class, the wealthy and the mob to provide a story of romance, suspense and thrills. Just like in Reflections, you are in for a shock!