Saturday afternoon I spent a chunk of time clipping coupons – for myself, my sister, and my daughters.  For the first time in nearly six weeks, I made a grocery list based on my apps and coupons. 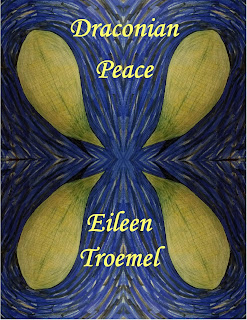 Ken went grocery shopping early on Sunday as he usually does.  He overspent by a little but I knew he would because we haven’t really shopped while we’ve been helping our daughter move.  He used a bunch of coupons – saving over $32.  In apps, he saved over $5.

I meant to spend my Saturday working on publishing but by the time we were done with errands, I was wiped out.  I tried napping to get rid of a headache and get some energy back but spent the time talking on the phone with multiple people including some of my daughters.

Sunday I managed to get one book published – Draconian Peace.  Here’s a brief description of it:

Racial tension has destroyed the relationship between the Draconians and the humans, leaving thousands of mixed breeds disenfranchised.  Prejudice and suspicion mar the joining of Dewi Bradon, half and half, and Lord Lachlan Camdon until they learn to look passed their race and trust in each other.  As they begin to trust, changes ripple through society and expose rampant corruption and crime.

It’s available on Amazon and Smashwords for now.  It will get out to all the other options as time permits.  There is a paperback as well on Createspace.

I kept getting interrupted so only one item published.  I did work on a holiday gift and have it about three quarters done.  I’m pleased with the pattern and how it’s working out but it means I’ll have another pattern to publish.  I might submit it for publication first to see if I can get it in a magazine.