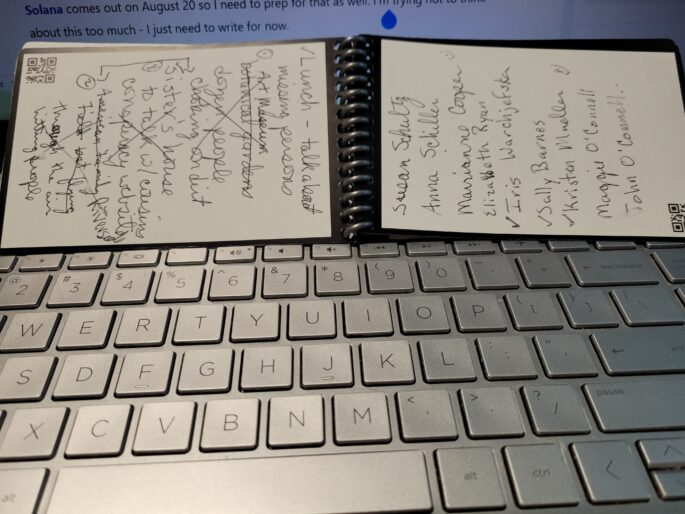 While on vacation, I spoke with the organizer of some anthologies. I have certain ones I always look at and then try to determine if I have time and energy to come up with something. This organizer posted her 2024 anthology topics and I can’t think that far in advance. So I found her 2023 and 2022 lists. For 2022 she has a Halloween anthology and in my head pops – oh, I could do the next Paranormal Investigators story.

Oh my head gets me in trouble sometimes. I reached out and asked if she still had rooms. She said yes. I said – hold don’t add me yet. My fear was I’d sit down to write and zero would come to me. I didn’t want to let her down. So I started writing – as I’ve said previously.

Tonight I was doing research and getting distracted but I sat down to write. I thought… not sure this is going well but I did a map of locations and more came to me. Then I researched a location which sidetracked me. But eventually I got down to writing. I brought in characters from the first story. I love the scene at the sister’s home.

However, I knew I had to get into another ghost scene and I had NO idea whatsoever of what I wanted to do. I literally have the characters standing backstage and no clue what to do next. I could almost hear Harper (my main female character) sighing about the delays.

Now I’m done for the night – it’s late and I have to work tomorrow. But I’ve managed to write 2111 words tonight and my story is now around 6800 words. I can have 20K so I’m not worried at this point but I still have several ghosts and locations to get to before I land on the finale.

Progress is good but I have a deadline of September 2. It needs to be written, edited and ready for the organizer. My day job gets busy (or in my case busier) at the end of August so I need to stay on top of this one. Lets not forget I have book releasing this month too. Solana comes out on August 20 so I need to prep for that as well. I’m trying not to think about this too much – I just need to write for now.