It was a good weekend.  Friday I left work to go to the doctor with Vicki.  We were forceful about her needing a different antibiotic.  She has a sinus infection – the first antibiotic didn’t help.  Our ENT said this happens a lot.  So we got the second antibiotic and it worked.

After the doctor’s office, we went to Joann’s to spend my gift card.  I got yarn to make a blanket for my mom as she particularly liked one of the ones I made while she was in the hospital.  I’ll work on it this week I think.  We spent quite a bit of time wandering the yarn aisles.  It was a nice escape.  By the end of the trip, I spent my gift card and thoroughly enjoyed myself. 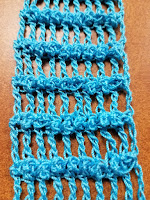 Saturday was errand running and then we watched the Die Hard movies.  While watching I crocheted.  It was nice to sit down and not think about anything but a mindless movie and crocheting.

Of course I paid bills this weekend and checked on sales for my books.  The fun thing was Friday night Stephanie called for some crocheting advice and we chatted with her while the three of us (Vicki was with me) crafted.  Even though we were in different states we crafted together and chatted.  It was fun.

There were the inevitable chores which had to be done.  Vicki and I worked on prep for food this week.  She made apple crisp and I made garbage soup.  The nice thing – Sunday I spent the whole day in my jammies.  We watched the Lethal Weapon series while we crafted.

A couple of editors sent me books to review.  I’ve gotten eight to ten from them.  I’ve read and reviewed three.  I read one last night.  It was a beginner book for Wicca.  I’ll be writing the review today I hope.  I started a second one on tarot.  I’m hoping to whittle these down and get them off my to do list relatively quickly.

I didn’t get to publishing but I’m hoping to do that next weekend.  There will hopefully be fewer things going on.

For a pay weekend, it was pretty calm and mostly relaxing.  I needed a relaxing weekend with a bit of me and crafting time.  It’s nice to escape into the yarn and the pattern without thinking about anything else.  Hopefully it has refilled my energies so I can face another week of handling mom’s stuff and life in general.