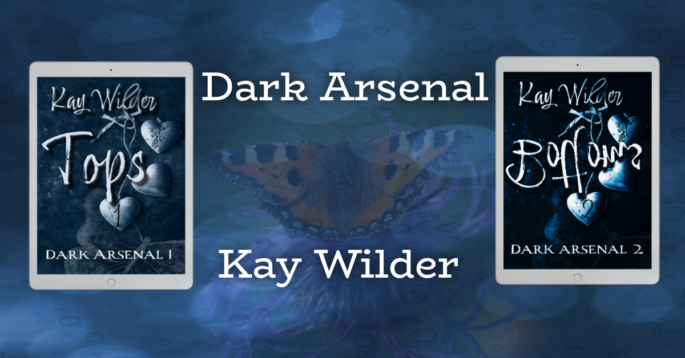 High functioning agoraphobic that doesn’t leave home without her therapy husband. Keeps to herself by vacuuming the driveway just to keep the neighbors from knocking for a cup of sugar. She stays current through punny names for her chickens and collecting knives and swords to appease the anxiety gods. The only real company she keeps is the characters in her head, even if they don’t want to hear what she has to say. Dark humor plenty, come live on the Wilder side.

I am a new author, my first book was published in January. Since then, I have published three more books this year and they are all dark RH books. I have a love for dark books, particularly featuring RH but I will not shy away from M/F either.

I have always been an avid reader. Spending far too many days up late, unable to stop until I finished the entire thing. When I was ten, my favorite author was Stephen King and I devoured his massive works in days. As I got older, I realized that I didn’t want the stories to end when the last page fell and I started writing my own ideas of what else could have happened in their lives. From there, I discovered I had my own stories and my own characters living inside me that wanted a chance to speak to the world.

My books are for adults and include explicit scenes and dark elements.

My current release was a quick release dark duet for the spooky season. It is a dark contemporary RH.

Nessa is a twenty-four year old woman living in New York City with her best friend Hannah while she finishes her masters degree in Anthropology. Nessa struggled with anxiety and panic attacks since the loss of her father at a young age. She hopes to work for the Smithsonian once her degree is finished in the spring.

Nik is an attractive blond detective for the New York City police department who works closely with the forensic team. He is asked by the university to fill in as a substitute professor.

Tanner is Hannah’s boss and the owner of Tops/Bottoms (an exotic club).

Tops/Bottoms is a Dark Contemporary Reverse Harem set in New York City. Vanessa is a 24-year-old anthropology student looking to get her masters before she leaves the city behind to work at her dream job at the Smithsonian. Her best friend Hannah is also working on her master’s in accounting, while affording a NYC lifestyle by stripping in the local exotic club named Tops.

Things take a turn when Hannah is mugged on her way out of Tops one day, prompting Nessa to meet with Hannah’s boss Tanner.  The next thing Nessa knows, her entire life is being turned upside down as she is moved into protective custody with Tanner and his two business associates.

Tops/Bottoms will feature many dark elements and you will find plenty of flaws in these characters. There are instances where the fmc is in danger of sexual or physical assault, however no sexual assault scenes are described in this book. Bottoms in particular will feature severely dark themes such as assault, stalking, drug withdrawal and murder.

Speaking of asses, Tanner stopped and pushed a button inside the wall. We had gone the opposite direction out of his office this time. A soft ding sounded before a panel slid to the side and revealed an elevator.

“Your bracelet gives you access to elevators and security passages all over Tops and Bottoms,” Tanner said without bothering to look at me.

“It would be helpful if you gave me a map of this place, since you seem too busy to show me all these passages yourself.” I let some of the bitterness bleed into my voice. This was the second time I had made an ass of myself by accusing Tanner of doing something wrong. I might as well kiss any ideas of a romance between us goodbye.

I remembered Colten and how I had simply referred to him as “the suit.” Fuck.

“After you,” Tanner said as he pointed inside the elevator. Since we were just standing in the hallway looking into the hidden room. Maybe I would need to escape, after all. Just to hide from all this embarrassment.

I led the way into the elevator, turning to see Tanner stepping into the small space with me, adjusting the collar of his shirt. Why did he always look like he was walking out of a magazine shoot? My feet shuffled to the side to give him more room. This wasn’t a large elevator by any standards, and we stood nearly shoulder to shoulder in the space.

It felt like it took an eternity before the panel slid back into place and the elevator started to move. But it didn’t move downwards like I expected. We were moving up. I hadn’t imagined there was anything beyond the loft.

The awkward silence caused me to start to fidget as I felt the creeping sensation of unease washing over me. I had just accused him and his business partners of being involved in illegal activities. If he was a bad guy, he easily could have made up a lie and was now taking me up to the roof to throw me off. Nik could always make sure it was ruled a suicide.

My breathing started coming in short, shallow bursts as my body moved from side to side. There wasn’t enough room to house both Tanner and my fidgeting in the tiny elevator, causing me to bump into his side accidentally.

“Sorry,” I muttered, wrapping my arms around myself, trying to melt into the wall.

“Are you okay?” Tanner asked. He turned to face me.

“You’re not planning on throwing me off the roof, right?” I said, half laughing in the madness of my fear and my apparent bluntness combined. I wasn’t being smart in how I needed to be if my goal was to stay alive.

“Why do you always think the most absurd things?” Tanner said as his hand ran through his hair. “I wanted to show you the rooftop in case you just need a place to be outside. You can’t keep yourself locked up in your bedroom all the time. It isn’t healthy.”

“Right, you’re so concerned. Is that why you haven’t bothered to be around me for the past two days?” I snipped at him, finding my anxiety turned into anger. I wasn’t even sure who I was mad at or why, but Tanner seemed to be my preferred outlet.

“I’ve been busy trying to arrange a meeting with Fynn. Not to mention running my business and looking after the safety and wellbeing of all my staff. You haven’t bothered to leave your room. Why do I need to worry about you when I devote all my resources to your protection?” Tanner’s back straightened as his words came out even sharper. He aimed them at me like knives.

I straightened up, pushing off from the wall. He could try to cut me down with his words, but all they did was send a hum of energy through my veins. Arguing with Tanner in person set my blood to fire even more desperately than texting him.

A soft ding sounded before the panel moved to the side. I hadn’t even realized we had stopped, but it didn’t matter because my gaze was still trapped within Tanner’s. His entire body was rigid, as if he was holding himself back. I wondered what he would do if he snapped.

The door stayed open for several seconds before slowly shutting us back in.

“Were we not going to the rooftop?” I bit out, hoping my words could hit him like venom. If he wanted his words to feel like knives, then I wanted mine to eat away at him.

“I don’t think we are quite done here yet,” he said tersely.

My favorite scene in Tops is a moment between Nik and Nessa at the police shooting range.

I would consider myself still a beginner, but to anyone that is thinking about publishing by best advice is to write. Keep writing. Write every time you feel like writing. Don’t worry about the commas or the structure. Just write. Tell your stories.

My name is Vanessa Harlow, and I have been kidnapped, drugged, and held against my will. I have no idea if Tanner, Colten, and Nik are out there looking for me, but it wouldn’t matter anyways. Looking out the windows of the old farmhouse I now called home, I knew I wasn’t in New York anymore.

The old rules I used to live by no longer apply. Not when I was living with a psychopathic murderer with a stalking problem. Even if I managed to escape, he would bring me back again. He says he’s changing me. Transforming me into something… darker.

All I have left is a will to survive, even if that means changing the rules.

The city’s noise followed me years after I left that godless place. But being in an area without God meant there was just enough pleasure in the chaos to make you forget how terrible it was. Or at least how terrible I should have thought it was. The sounds of the city and all the people in it drowned out my own voice of self-preservation. Up became down. Left became right.

It took me a while to truly understand what that meant. My time with them made me question who I was and who I simply thought I was supposed to be. A group of unforgettable men turned my world upside down by pinning me like a butterfly to a board. It’s funny how in life, sometimes the thing you need the most is the one thing that can shatter you from the inside.