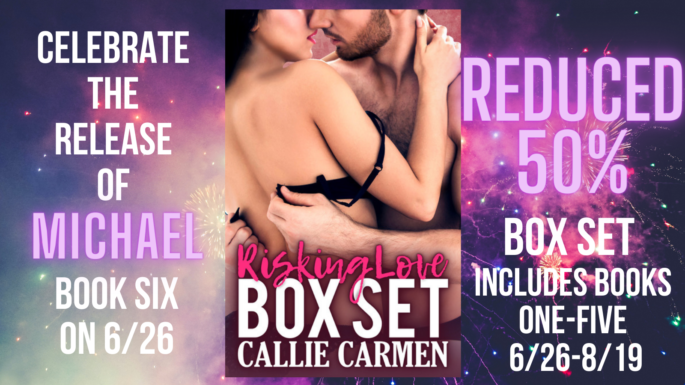 Michael – Olivia had spent enough time on memories of her ex-boyfriend’s abuse. She was going to put all of her efforts into her new business career. And try to convince her boss, Vice President Michael Evans, that the woman he’d been dating was nothing more than an opportunist and that she’d climb into bed with anyone that could get her to the top.

Michael, who lost his younger sister to an abusive relationship, was falling in love with Olivia. He kept his distance from her and waited patiently for a sign that she was ready for his love.

Michael is the sixth and last novel in the Risking Love series. The stories chart a group of friends through life and love. These steamy stories will have you laughing, crying, and your heart racing.

Patrick
Jaq had no interest in a serious relationship because life at an early age had taught her that men weren’t to be trusted. But she met Patrick who soon had her thinking about risking her heart. For Patrick the time for Jaq dating other men had ended. He wanted her all to himself. But would she stay if she knew the secrets of his past? Patrick wasn’t the only man who wanted Jaq, and the other man was willing to kill to have her.

Nicolas
Carlie planned to finish at the top of her class, get a corporate job, and work her way up the ladder. She refused to risk having a life of poverty ever again. Within her plans, there was no room for a relationship. So she had sworn off men; especially the good Dr. Nicolas Antonis.Nicolas had other plans. They included her becoming his.As if Nicolas wasn’t a big enough distraction; Carlie had to worry about her roommate’s, abusive ex-boyfriend, coming for her too.

Joseph
Violet had experienced a lot of loss in her life. She wasn’t sure if she could ever trust love again. That was until she fell for Joseph. The problem was he belonged to her friend, Bella. Could Violet risk her friendship over a man? If she did break that friendship, would it destroy her relationship with her closest girlfriends forever? If Violet risked her heart again and had a night of uncontrolled passion, would he abandon her like the others she had loved? Or would Joseph be her salvation?

Anthony
Tessa seemed to have it all; her father’s fortune, men falling at her feet, and a fairly new but successful business. Secretly, all she longed for was her mother’s hug once more, her heartbroken widowed father acknowledging her existence, and the love of Tony. Recently divorced, from a selfish, demanding ex-wife, Tony Telesco wanted nothing to do with a rich, spoilt, daddy’s girl like Tessa. Would she be able to convince him she was not as she seemed?

Joshua
Bella had watched her friends find the men of their dreams, while she’d wasted the last year with a man that had barely touched her. After meeting the mysterious businessman, Joshua, she was hopeful he’d add some passion to her life, only he kept leaving town, and had his longtime friend, Ava, house sit for him. What was up with that?

Joshua was finishing up a two-year ex-pat assignment overseas and couldn’t wait to get back home to the USA for good. Especially after meeting the sexy Italian beauty, Bella, who he hoped would still be single when he got back to Michigan.

Ava had other plans in mind for Josh, and they didn’t include Bella.