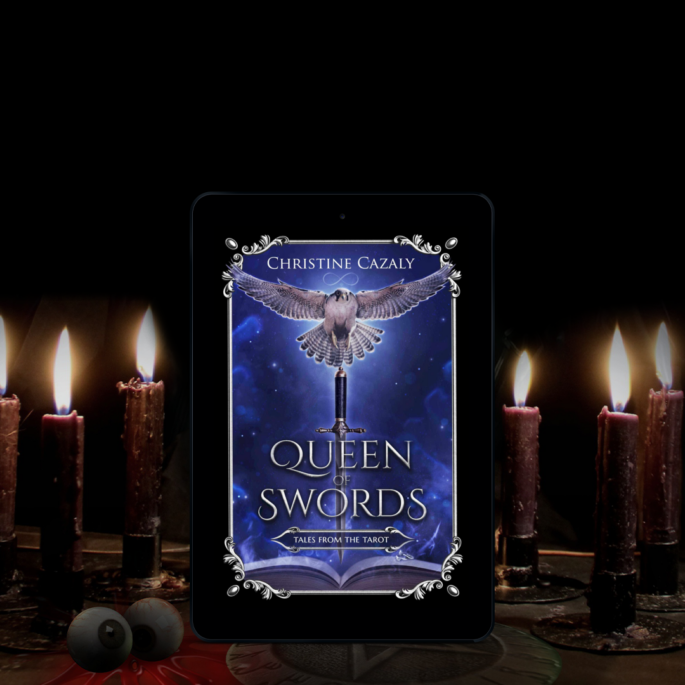 Author, Tarot Reader and professional ballroom dancer. Often found in the local woods and moors with dog and husband, or in a creative daze at her computer, or reading a book. Occasionally, I also teach people how to dance!

I’m a professional ballroom dancer by trade, and author and tarot reader by choice. I live in a semirural village in West Yorkshire, England with my long-suffering husband, Jim, two rescue cats and my fabulous dog, Bingo.

In my head, I’ve been an author all my life. Books fascinated me from a very early age. Even the old-fashioned ones, with the dark green and red binding and faded gold lettering. My mother used to catch me staring at her bookshelves and say, “You can have them when you learn to read.” So that’s what I did and never stopped. I’ve always got a book on the go.

I’m an eclectic reader. Basically, I will read anything. Even the ingredients on the back of a can of baked beans, if that’s all that is available. As a teenager, I loved historical romance. All those tales of adventures on the high seas, in lush tropical paradises. These days, I enjoy fantasy of all kinds, anything with an element of adventure, with well-drawn characters and a good plot. I adore Harry Potter. Potterhead! (I’m a Gryffindor, by the way!)

Queen of Swords is a standalone new adult/adult fantasy fiction. However, forthcoming books may straddle several age ranges, depending on the adventures of the protagonist. In this first book, Petronella of the Falcons is twenty-six, and struggling with her inability to provide a desperately needed heir to her kingdom. The next full-length book will be Page of Swords, and the protagonist, Dominic Skinner, is only about 15, so his is a coming-of-age fantasy adventure based in the same world.

Queen of Swords is available on Amazon now. I’m currently writing a prequel novella to her story – The Seer of Epera, which will be on Amazon permanently free as an introduction into the Tales from the Tarot series. Page of Swords is in plotting stage, but Dominic had to duke it out with Domita Lombard, who is the protagonist in the next book, Knight of Wands.

The key characters in Queen of Swords are Petronella of the Falcons, reluctant and failed queen and wife to Arion, King of Swords. Other major characters are Domita Lombard, a rambunctious and fiery red head from the desert land of Battonia, Felice de Winter, her long time nurse and friend from earthy Argentia, and young Alice of Oceanis. Lord Joran of Weir provides the love interest, and I’m afraid I can’t tell you about the baddie, because #spoiler!

A failed queen, fatefully bound to a dying kingdom.

Dutiful, bookish Petronella is not the powerful queen her country needs. Unknowingly bound to the land by ancient, forbidden magic, Petronella’s only task is to provide an heir to the throne of Epera.

Ten years into her reign, she has failed. Her land is dying; the people are starving, and her pain maddened husband, Arion, is out of time, patience and options. The cost of Petronella’s failure will be her life.

Pursued by her enemies, Petronella’s search for answers leads her far away from her kingdom to Oceanis, a land of powerful magic, and enormous temptation.

But, with the future of her kingdom in the balance, a new power is rising to take advantage of their weakness. A secret and vengeful enemy who will stop at nothing to reshape Epera in his image and end the line of the Eagles forever.

What Petronella learns in Oceanis will challenge everything she thought was true and lead her to a tragic confrontation with a deadly adversary for the heart, soul and survival of her beloved Epera.

Petronella awoke with a jerk as the mid-morning sunlight warmed her pillow. She stretched a crick in her neck and rubbed her eyes. A pleasant lassitude lingered that made her long to stretch and go back to sleep, preferably with Joran’s arms around her. Her cheeks warmed and her body tingled as her mind roamed through the events of the night before.

It had been… wonderful.

One servant must have already braved their hangover to prepare a bath for her. The tub steamed, inviting her presence, and she crossed the room naked to slide into the silken water, reaching for the soap. Birds sang in the olive trees outside her window and laughing voices chattered in the courtyard. She ducked her head under the water, blotting them out, and then surfaced, blowing bubbles. The curtains at her window billowed. She blinked. She was not alone.

The stranger stood at the entrance to the balcony. Clothed in stark black, his sudden presence against the crisp white of her curtains was like staring into the dark mouth of an empty grave. Thick set. Tall. Long, tangled blond hair. A raw scar disfigured his face. It ran from the corner of his right eye and carved a ragged, oozing path across his tattooed cheekbone to the corner of his mouth. Her eyes flashed to the sword at his side, the knife in his fist. Her memory offered the vision of a dark night on a crowded bridge, dangerous water sliding past her terrified eyes, and the desperate, random swing of her blade.

She gasped, sliding backwards in the bath and scrabbled for a weapon. Her hand found her bar of soap, but there was nothing else there to aid her. Her dagger was still in its scabbard under the bed where she had kicked it days ago. She cursed herself for not being more wary. The man waited. He appeared to enjoy watching her panic. His eyes held the deadly certainty of a striking hawk.

“Who are you?” she ground out, still scanning the room for something to aid her.

The man gave her a painful, lopsided smile that didn’t meet his eyes.

“I am here to collect your ring,” he said, taking a step forward into the room. He raised his knife.

Her diamond pulsed once on her finger and her panic left her. Cat-like, he glided towards her. Each footfall brought him closer, and her gaze locked on his dusty boots. She seemed to have all the time she required to bring her arm up and toss the wet soap with unerring accuracy into the path of his next step. She was out of the tub and sprinting for her dagger before his thick body thudded to the floor.

Grabbing the scabbard, she whirled, knife in hand, as he regained his feet, face twisting in rage. She didn’t wait for him to close in. Eyes narrowed, she fired the blade at him with all the force she could muster. It pierced his left eye, and he gave a shriek of shock and fear before his body collapsed underneath him.

She sank to the bed, her hands reaching for a robe. Fastening it around her body, she crossed to the corpse. His blank, one eyed gaze stared up at her. Her knife protruded from his skull. She swallowed against a wave of nausea as time snapped back to normal speed.

She had a fleeting mental image of him snatching up his sword, and then his feet pounded down the corridor outside her room and the door slammed open. He stumbled to a shocked halt at the sight of the body and turned to her, face ashen. His hair was standing on end, a mess of tangled honey, his jaw stubbled. He scraped his hands through his hair.

“He is… was… a paid assassin. His name is Bastien. He is notorious. Never misses a kill. How did you manage it? You should be dead by now.”

“I was in the bath. He surprised me, and I thought he had me and then… something happened. My ring pulsed and… it was like time slowed down.”

Joran’s eyebrows raised to his hairline. “Or perhaps you sped up?”

She shrugged. “Whatever happened, he’s here, which means I was right. Your borders are not safe.”

“Unless he was here before they closed.”

“Someone tried to kill me on the bridge at Goldfern. I stabbed him, remember? If this is him, the borders were already closed.” She swallowed and reached for a day gown. “We must tell Merlon. I knew I was right to be worried. Arion’s forces have found another way in.”

My personal favourite scene is the climax at the end of the book – but again spoiler alert.

Not sure in what context – but my best advice to anyone wanting to do anything is – Start. Learn. Practice. Get obsessed. Get determined. Fall in love with your dreams. They are so easy to tear, but also easy to repair! Finally, if in doubt, do the thing that makes your heart sing.

“It’s our choices that make us what we are.” Mistress Eglion, Seer of Epera.

In Epera, one does not speak of the old gods on pain of death, and officially, magic does not exist. It has become a nation famed for its scholars and its manufactured goods. But the kingdom is on its knees. Crippled by flood and famine, unable to feed its people and at war with its neighbours. Arion, its fearful and pain-wracked king, believes himself cursed by dark magic and blames his queen for her inability to bear an heir to the throne.

Petronella, Queen of Epera, wants nothing more than to do her duty, but after ten years of trying every available remedy, she has run out of ideas. When she learns the price of failure is her life, there is only one possible, unthinkable option left – escape to seek help in the forbidden, magical land of Oceanis – the kingdom upon which her husband has recently declared war.

But the road to beguiling and seductive Oceanis holds many challenges for the bookish and guilt-ridden queen, and Petronella begins to realise that her life up to now was never all it seemed. As the two nations clash, Petronella uncovers the edges of an old and deadly secret, and will soon face a tragic choice that will either save her beloved kingdom, or damn it forever.