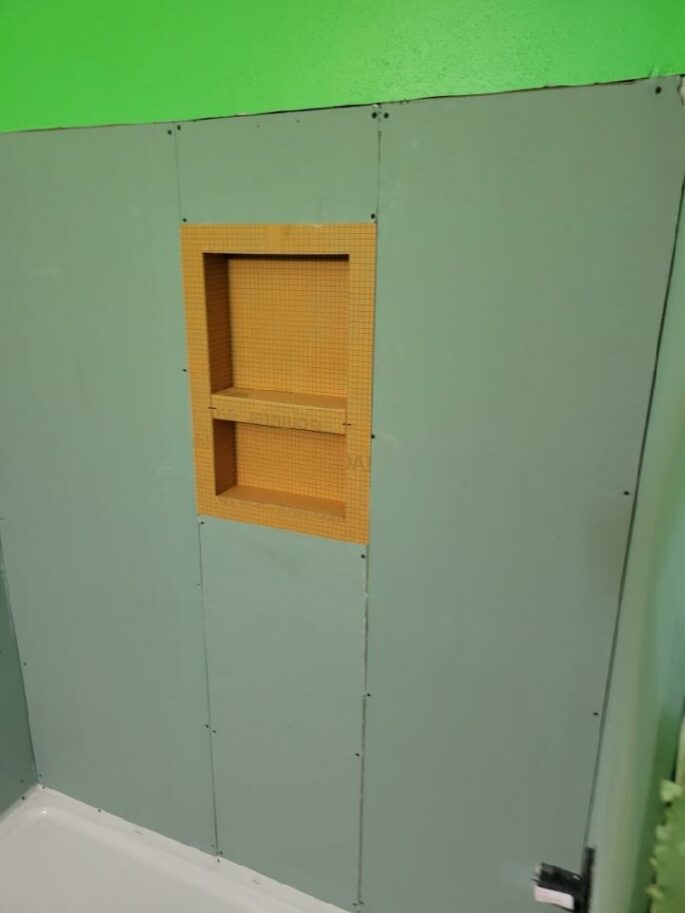 Friday the plumbers left and we were left with a pan as I showed in part 1. Yesterday, Ken got the green board up. He also mudded and painted part of the bathroom. While he worked on that Vicki and I worked on processing tomatoes.

Today we spent time processing tomatoes. We sorted 100 pounds of tomatoes to process for sauce and diced. Today we got the sauce done. While we did that Ken worked on the bathroom again.

Ken got the membrane up. Now that has to dry thoroughly for 24 hours. While he was doing part of the tomatoes, Vicki took time and painted the bathroom. Now Vicki is short and she forgot to bring up her step stool from the basement. So she got what she could reach. Oh and no paint on the cat so that’s a bonus. A second coat will have to be done but the new color is beautiful.

We’re all really tired after a long day of work. Thankfully Vicki did a slow cooker meal. Chicken and dumplings which I typically don’t like but it was delicious. I loved the bread / dumpling that was on top of it.

Tomorrow – tile!!! Vicki and Ken will work on the tiles in the afternoon after the 24 hour period for the membrane stuff to dry. In the morning, we will work on canning diced tomatoes. It will be a long day of working again. However, the tiles should go up tomorrow. I’m excited to see how it turns out. 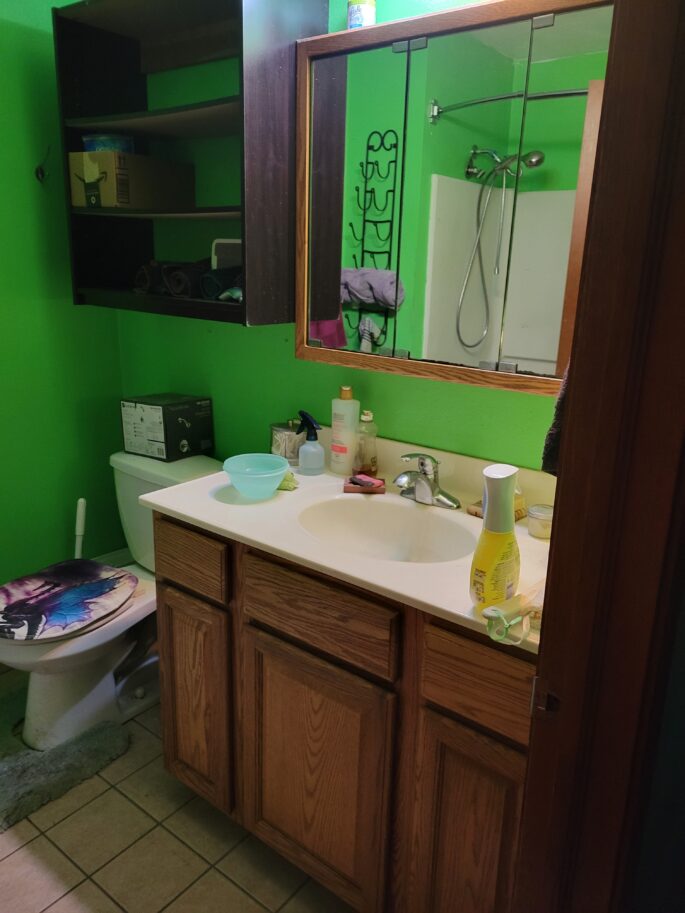 For months now, I’ve struggled with getting in and out of the bathtub to shower. With rheumatoid arthritis (and the other ones I have), stepping over the side of the tub has become increasingly more difficult. I already use a shower chair because standing for the length of a shower has become too difficult.

In the midst of the downstairs remodel (still have a few things to do down there), we decided it was time to make changes upstairs. Here are some before pictures:

For the most part, we are doing this remodel in two parts. Back in June we started making decisions on what we wanted in the bathroom. The first was to decide to go from a shower / tub combo to just the shower only.

I’ve never liked the tub. It was too shallow and too short. However, Ken used it so he was reluctant to get rid of it with no other full bathroom in the house. Fast forward fourteen years, we have the second full bathroom with a giant tub so going down to shower only upstairs works.

So in June we scheduled for the plumbers to come back and do the upstairs bathroom. There was a lot of discussion about whether to go with a shower surround or not. I really wanted tile. It was the one thing which I felt strongly about but we hadn’t done tile and hiring is more expensive. So initially we were going to put in a surround.

However, my middle daughter and husband figured out how to tile her bathroom wet room. This meant they were experienced at tiling and knew all the steps. We are going with tile rather than a surround!

Yesterday, we got first steps done. The plumbers took out the old tub/shower combo and put in the pan. More than that, they redid some of the plumbing so hopefully we have better drainage.

Bash Bear isn’t sure he likes the change. He spent a lot of time in there last night checking out all the changes. This morning he is less tentative. He loves being in the bathroom. He demands pets and snuggles from anyone (mostly) who goes in the bathroom.

Today, Ken has already put Killz on the spots on the 2x4s to reassure me there will be no mold. We’ve talked about where to put the niche, handicap bar, and rainfall showerhead. Surprisingly, there was no grumbling on either of our parts.

Next he’ll be putting up green board (i.e. drywall for bathrooms), adding 2x4s to framing for handicap bar and niche, membrane, and then painting some walls.