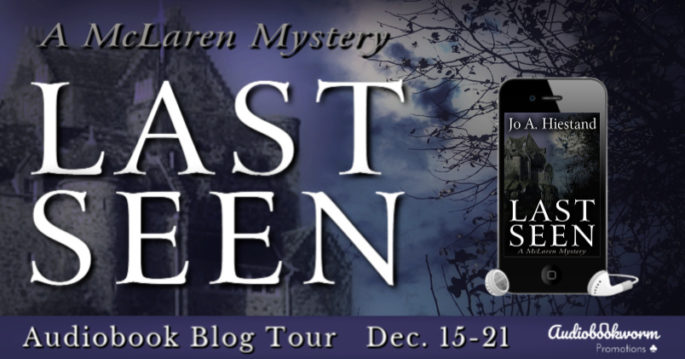 One dark night, popular singer Kent Harrison goes missing after his performance at Tutbury Castle. When his body’s found in a forest, the police investigation focuses on Kent’s ex-wife, a local herbalist, a covetous colleague, and even the curator of another castle who tried to lure Kent into performing there. But his occasional singing partner, Dave Morley, seems to have the biggest motive. He’s dying to make his name, money, and the big time, especially at the medieval Minstrels Court reenactment, where Kent’s appearance guarantees standing room only. Did Dave murder Kent to eliminate the competition…or had their partnership struck a wrong chord? To entice him into investigating, ex-cop McLaren’s girlfriend plays detective. But Dena ends up in great danger. Now, McLaren must not only solve Kent’s murder but also rescue her. A hard task when a web of jealousy, anger, and lies covers the trails.

Jo A. Hiestand can usually be found at her computer, which is good, since she writes three mystery series. It seems a natural progression from her job as a graphic artist – crafting word images on a sheet of paper instead of creating graphics on the computer screen. Between the two computer stints, she lived in Britain for her semi-pro folk singing career and became friends with several English police detectives. The latter relationship was not a consequence of the former calling, however, but all these UK aspects find their way into her books. When not tapping on the keyboard, Jo enjoys reading, baking, and photography. She lives in the St Louis area with her cat, Tennyson, and way too many kilts.

I received this audiobook as part of my participation in a blog tour with Audiobookworm Promotions. The tour is being sponsored by Jo A. Hiestand. The gifting of this audiobook did not affect my opinion of it.