Skip to content
“It’s a Hole in the Ground!”
Technology is often cursed and condemned as being bad, evil, and will eventually bring about the end of the world.  However, technology moves our culture forward and changes our worldview.  As we expand and change our worldview, the narratives we relate to change in accordance to the new information. To illustrate this, I’ll compare descriptions of the Grand Canyon with an array of pictures to show the progression of society’s understanding of the natural wonder.
If your only knowledge of a place is someone’s description – verbal or textual, you have limited understanding of the location.  The first quote gives a very different picture from the subsequent two descriptions
“It [the Grand Canyon] looks like the Gates of Hell. The region … is, of course, altogether valueless. Ours has been the first and will undoubtedly be the last, party of whites to visit the locality. It seems intended by nature that the Colorado River along the greater portion of its lonely and majestic way, shall be forever unvisited and undisturbed.”
Joseph Christmas Ives, 1858 his journal, Prampolini Gaetano, Pinazzi, The Shade of the Saguaro / La sombra del saguaro.  Essays on the Literary Cultures of the American Southwest, pg 449
“I have heard rumors of visitors who were disappointed. The same people will be disappointed at the Day of Judgment. In fact, the Grand Canyon is a sort of landscape Day of Judgment. It is not a show place, a beauty spot, but a revelation. The Colorado River, which is powerful, turbulent and so thick with silt that it is like a saw, made it with the help of the erosive forces of rain, frost, and wind, and some strange geological accidents; and all these together have been hard at work on it for the last 7 or 8 million years. It is the largest of the 18 canyons of the Colorado River, is over 200 miles long, has an average width of 12 miles and is a good mild deep. It is the world’s supreme example of erosion. But this is not what it really is. It is, I repeat, a revelation. The Colorado River made it, but you feel when you are there that God gave the Colorado River its instructions. It is all Beethoven’s nine symphonies in stone and magic light. Even to remember that it is still there lifts up the heart. If I were an American, I should make my remembrance of it the final test of men, art, and policies. I should ask myself: Is this good enough to exist in the same country as the Canyon? How would I feel about this man, this kind of art, these political measures, if I were near that rim? Every member or officer of the Federal Government ought to remind himself, with triumphant pride, that he is on the staff of the Grand Canyon.”
J B Priestly, 1937, Midnight on the Desert, http://ncse.com/education/grand-canyon-poems-stories 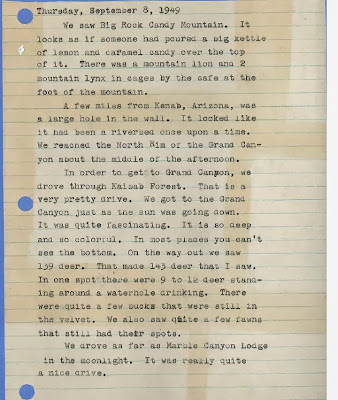 Joan Stone, description of visit to Grand Canyon, 1949
These three descriptions are very different.  One describes the location as being equivalent to hell while the other two expound on the beauty of the location.  Yet they describe the same location.  The narrative from the first would be of a fearful and desolate place; while the narrative from the other two portrays a much different locale.  None of these adequately describe the avariety of landscape or the emotions evoked on seeing the Grand Canyon.
Pictures – sketched or photos taken with cameras – change the way we see the canyon because there is a representation that comes nearer to representing the natural wonder.
The next progression is to have sketches, drawings, or paintings of the regions.  These next two pictures are of sketches and a map of the region.  They illustrate the canyon in simple ways while adding to the text above.

This 1858 hand-colored map, titled “Rio Colorado of the West,” is one of the earliest visual representations of the Grand Canyon area. It was prepared by John Strong Newberry, M.D., a geologist with the expedition led by Lieutenant Joseph C. Ives. It was published in 1861 by the U.S. Government Printing Office in the Report Upon the Colorado River of the West, Explored in 1857 and 1858 by Lieutenant Joseph C. Ives, Corps of Topographical Engineers, Under the Direction of the Office of Explorations and Surveys, A.A. Humphreys, Captain Topographical Engineers, In Charge.  Photo: Digital image courtesy of Cartography Associates, David Rumsey Historical Map Collection.  http://grandcanyonhistory.clas.asu.edu/history_humansatgrandcanyon.html

This panorama from Point Sublime is a composite of three sketches produced in 1880 by William Henry Holmes, a geologist and artist who accompanied Clarence Dutton and Jack Hillers to the North Rim that year while Dutton was preparing his Tertiary History of the Grand Cañon District. Holmes had also accompanied F.V. Hayden’s survey in 1872. Digital image courtesy of Cartography Associates, David Rumsey Historical Map Collection.  http://grandcanyonhistory.clas.asu.edu/history_humansatgrandcanyon.html
If you read one of the descriptions of the canyon and then saw the sketches above it would put form to the words you would have read.  Going from the text to the picture changes a person’s comprehension of what the Grand Canyon is.  While this must have taken a great deal of time and effort, it is a limited view of the Grand Canyon.  It certainly gives an impression of the expanse of the canyon but doesn’t illustrate the range of color or the immenseness of the canyon.  Leaping forward 136 years and several evolutions in technology, the pictures by Suzanne add comprehension and layers of narrative.  The link below shows the same type of view as the sketch from 1880 but adds layers. 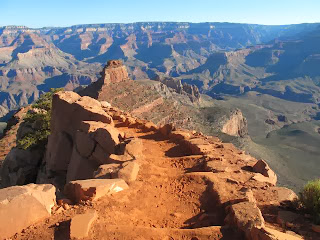 Suzanne Inez Jaillet-Isham (Lily), Rest stop South Kaibab Trail, 2010
Click on this video link to see an expanse of the Grand Canyon similar to the sketches above:
https://www.youtube.com/watch?feature=player_detailpage&v=ZtF1VYX0iAQ&list=PLjIIDlvjVGSjQZG8j51mC9PiurGzd2x8q
Suzanne Inez Jaillet-Isham (Lily), 2008
The video shows a section of the Grand Canyon and allows you to see the real colors, gives a deeper perspective and depth than the sketches above.  The sketches above seem surreal compared with the video.  The change in technology changes the perspective of the viewer.  With the change of perspective, the narrative changes.  Instead of seeming unreal, the canyon now seems real.  You can feel the hard rock, depth, and harshness of the environment.  When compared to the written description, the sketch offers new layers for the narrative by providing a visual cue.  The video expands on those layers, adding in motion, depth, and more texture.
Early photos showed more of the Grand Canyon to a wider range of people.  However, the quality of the photo is grainy and lacks color.

Taken by F H Maude in 1899 at the bottom of Cataract Canyon, http://archive.library.nau.edu/cdm/search/searchterm/NAU.PH.90.15.*/field/all/mode/all/conn/and/cosuppress/
Even 50 years later, technology had advanced enough for a woman on her honeymoon to carry a camera and take pictures she thought would be once in a lifetime pictures.  The photo below is still grainy and shows no color but instead of lugging along a huge camera, this was taken with a small camera.  It does give more depth than the sketches but doesn’t show the colors of the landscape: 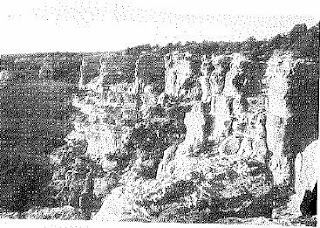 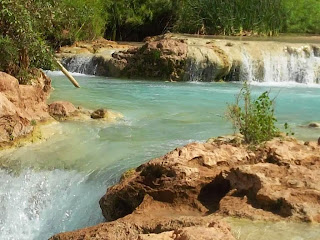 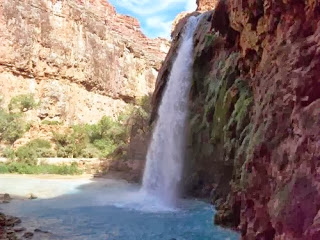 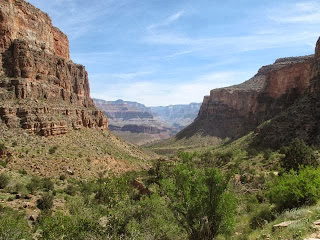 Suzanne Inez Jaillet-Isham (Lily), Indian Gardens on Bright Angel Trail
Technology advances and our knowledge of the area improves and increases.  We can see more remote locations as cameras get smaller and more portable.  Also quality of the photo improves as it becomes safer and easier to work in this medium.  As we discover more of a region we hadn’t known before, it sparks the imagination and shifts the narrative we tell ourselves and how we talk about life in general.
Technology may be cursed as it becomes available but ultimately it helps us advance our narrative about the world around us.  In some cases, it disproves theories and in other cases – like discussed above – it adds layer of understanding and accessibility.
Note – For a fair comparison I tried to keep the pictures the same size but clarity of picture played a large part in choosing the size of the picture.  In some cases this meant the pictures were not equal in size.  The intent is to show the best quality picture not to give preference to one picture or another.