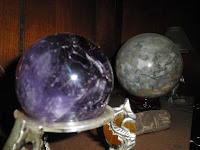 I’ve got three days off work before my day job goes crazy with advising.  It’s my non birthday year, today is my “birthday”.  At least somewhere between today and tomorrow my birthday lands.  My to do list is enough to keep me busy for a month (or longer).  But I’m tackling things one at a time.

This morning I slept later than normal – that was on my to do list.  I’m going to attempt to do the same tomorrow.  I got dressed – very reluctantly.  I’m going out later, so I guess clothes are necessary.  I finished two crochet projects.  Now all I need is some pictures and I can publish the patterns.  I worked on budget and bills.  I paid most of them but my check isn’t in my account until tomorrow – so I’ll pay the rest tomorrow.  I brought current my reports for my writing – sales, commission to TJ, adding in the new crochet pattern, and other things.

My goal was to be back in the recliner by 12:00 – it is now past that time.  However, I did play backgammon and some card games on my computer.  Maybe that gives me a little leeway.  I was supposed to get the two areas cleared that are still cluttered in my office.  As of right now, all I’ve managed to do is get the filing done.  I hate filing.  However the folders are made, the files are cleaned out.  I had two years of taxes which needed to come out – not sure how that happened I’m usually really diligent about taking the old out when I put the new in but it did happen.  I had all seven years in one file and separated them into individual files.

Ava – my middle daughter’s youngest cat – lay on the stand for most of the morning.  She liked me – or at least that is the interpretation I’m putting on it.  Really I was in her sun room and annoying her with my work.  I’m waffling between hitting the recliner and doing crocheting or moving forward with the office.  My legs will be the determining factor.  My fear is I’ll end up moving from one pile to the next and that is simply not acceptable.

I have my birthday journal entry to write.  It is my birthday and it is right here and it would be good to write it now and not put it off for three months (or when I get to it.  I started this in 2007 and wrote it in every year since (except I missed it in 2013 & 2015).  Last year my entry was short and crabby.  Maybe this year can be better.  My goal with this is to summarize how I feel about the previous year.

At the very least I’ve gotten some thing accomplished today.  I’ve got two more days off and then the weekend so hopefully I’ll mark off a lot on my to do list.