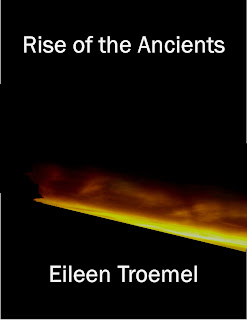 Rise of the Ancients is now available on Amazon and Smashwords.  I’m very excited to have this one finished.

Here’s a brief synopsis of it:

Samantha Crane’s arrival on space station Zed causes a stir.  Colin MacKenzie, Security Chief has a love hate relationship with her.  He loves her body, hates the trouble she brings.  This time she’s not playing.  Injured, exhausted, Samantha Crane let Mac in her ship and her heart.  But it may all be too late as an ancient enemy rises to destroy everything in its path.
Sam hides her heritage as she hides from her family.  Mysterious, dangerous, yet vulnerable, Mac can’t resist her.  Sensual and sexy, she draws him in but disappears too frequently.  Rescuing people from an overwhelming enemy, Sam lets down her walls to admit she wants more from Mac.

In the midst of discovering their love, Mac and Sam face her past, her enemies, and her abilities.  Not a team player, Sam has to learn to trust Mac, and the others on the station in order to confront an enemy stronger than any before.  A mystical prophesy tangles up Sam and Mac in danger and death.  Will she trust Mac enough?  Or will she lose her love and her life?

This book was completely unexpected.  I had finished a novel and was looking for something different to work on.  I have a file folder of starts.  I was going through it and none of them were speaking to me.  The name of this one was completely unknown to me.  I opened it and said – Oh this one.  I read through it and thought by the end, I would be done – nothing new.  But I was wrong.  I got to the end and said – oh I know what’s next.  From there it took  me very little time to finish writing it.  I spent a lot of time editing, adding scenes, changing the way some of the early part was written.

Now it’s done, all the prep and editing is done.  I like the story.  The characters are a bit gritty and rough and I like that about them.  There’s some softening but not in the way which is typical.  Considering where I started, I’m pleased by how well it turned out.