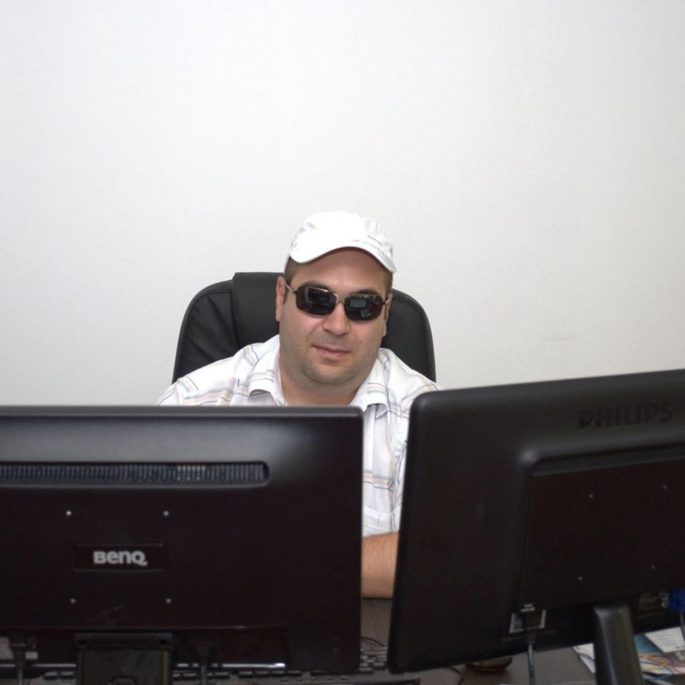 Emanuel Andrei and I met through social media.

Emanuel Andrei Cosutchi lives in the European Union, Romania. He has a regular job working as an IT engineer. He writes books in his spare time. His goal is to become a professional writer. His dream is to see at least one of his books turned into a movie. Emanuel Andrei Cosutchi started writing books since August 2016, because he loves the Science fiction and Fantasy genre.

Emanuel Andrei Cosutchi now needs to find a professional publisher for his space opera Starship “Apple of Discord” and the rest of his books. Any help would be appreciated!

Hello and thanks for having me!

To begin, my full name is Emanuel Andrei Cosutchi, friends call me Andrew.  I was born in August ’77, so I chose my nickname ACE977.

I live in the European Union, Romania – you know the country of Dracula and the former World Tennis Associations number 1 ranked, Simona Halep.

I work as IT Engineer. My goal is to become a professional writer. My dream is to have one of my books turned into a movie.

Once I was a consumer of books. Also I watched movies and I played video games, but one day I decided to create my own Sci-Fi universe. I started writing in August 2016, having in mind this consumer experience.

I read mostly science fiction and fantasy books, but I like other genres too, excepting horror.

My favorite Sci-Fi books are:

My favorite Fantasy books are:

A Song of Ice and Fire by George R.R. Martin
Rune Swords by Clayton Emery and multiple authors

My current W.I.P. is a Sci-Fi novel called The forsaken colony. I also strive to finish the fourth volume of my space opera Starship “Apple of  Discord”.  I finished the first three volumes on November 11, 2017 and I will write more, because this saga is not finished.

The science fiction novel The forsaken colony is not ready yet, so I prefer to tell you more after I will finish it this autumn. Both the standalone novel The forsaken colony and the space opera Starship “Apple of  Discord”depict alien worlds, advanced technology, alien civilizations and cultures. I present space and ground battles in my action scenes. I populated these books with villains and benevolent characters: aliens, warlords, dictators, traders, scientists, artisans, space pirates, colonists, travellers, soldiers, kings and princesses. I carefully carved out these two distinct Sci-Fi universes and I hope the readers will fall in love with them.

Here are the hook lines for all my books:

The Restoration – A reptilian species uses the time travel as a weapon to enslave other civilizations. An android is not content about the present and tries to alter the past.

SS Vagabond (not published) – In a distant dystopian future, Captain Edward Turner is struggling to survive, transporting goods and passengers with his freighter, SS Vagabond. Eileen, the second in command and Edward’s lover, urges him to accept a risky yet lucrative mission to Mars. What could go wrong?

Starship “Apple of Discard” (unpublished) – The Galaxy would not be the same, after the kidnapping of an alien crown princess.

This is from my first science fiction book, The restoration, which is avalaible on Amazon at only 99 Cents:

940 light years away from Earth

There were only two employees in the hotel’s reception office at that late hour. One was a male and the other a female of the same humanoid alien species. The males of this species had variegated marbled skin with nuances of forest green and big violet eyes, and the females had a sapphire blue color and shiny, topaz-like eyes. They had already worked continuously for fifteen Earth days and were due for a break, but the employees for the next shift could arrive only after the terrible snow storm ceased. When the aliens observed the lift moving to the ground floor, they rushed from their high-tech office. The two aliens approached the precious polished wood front desk that was filled with various objects. All of the aliens who saw them thought that these objects should be in a museum of history for common people. Only a millionaire from Earth could afford such luxuries as these.

A human emerged from the lift carrying a heavy backpack. The man wore an earflap cap and a long, synthetic fur jacket over a plain shirt and jeans. He was sweating profusely, but that was all that he could afford to buy from the colony’s bazaar.  The two alien employees looked at each other and giggled.

He mimicked the salute the club’s bartender had given him when he had stopped by there earlier.

“Greetings… Adam!” the alien male read from a discreetly camouflaged display. “How may I help you?”

The tour company the aliens worked for did not allow them to use advanced technology in front of the customers to preserve an authentic experience. Adam approached the front desk, searching for a bell, but found none. He was disappointed, so he asked, “Where is it?”

“What are you looking for, sir?” the alien woman asked Adam.

“You know… That thing that sounds when you hit it.”

“I am sorry,” the confused alien asked, “but I don’t know what you are talking about. Can you give me more details?”

Books are like children, so you can’t have favorites.

Facebook (the page dedicated to my space opera Starship “Apple of Discord”)
https://www.facebook.com/starshipAppleOfDiscord/