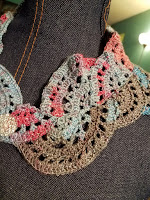 In my family, there’s a story my maternal grandmother was a descendant from a Native American.  I’ve heard this story my entire life.  It was interesting to get my DNA testing done and discover where my DNA comes from.  One of which was a slight indicator (1%) of Native American.

But of course, I have two parents.  My father is passed so we couldn’t test him.  However, my mom did get tested and we recently got her results.  There was a lot of similarity in our DNA – as you would expect – but interestingly no Native American, not a trace of it.  This means if there was any (which with such a small percentage it’s debatable) Native American in my lineage, it came through my father’s family.

One of my sisters also got her DNA done and it was fascinating to see the differences between her and I even though we have the same parents.  We were able to see three areas which were not in my mother’s DNA so they are good indicators of our father’s DNA.

I find genetics a fascinating topic and if I were science minded (which I fail at completely) I would go into genetics.  Now it would be interesting to see how the other siblings compare.  I would also love to have my husband and all my daughters tested.  I just have to convince the people and find the money to do it.

We had our rummage sale over the weekend.  We got rid of several of the big items and some of the other stuff.  When it was done, Ken and Vicki filled up her Equinox and took a load to Goodwill.  During the sale, we only sold two big items which was disappointing.  Vicki suggested we post the other items on Facebook.  So I did.  We sold three more items through Facebook.  I have a number of them still posted and we will see what happens.

We still have items in my garage which will need to be loaded into her car and donated.  I’m hoping that will be on the agenda for this weekend.  There were a few other things which were higher dollar items I want to post to Facebook.  Additionally, I have a bunch of crocheting I want to do.  Preventing me is the need to work on my stories.  They’ve been taking over!  I love it but it can also be exhausting.

The next thing for me to prep for is to determine if I’m going to make the attempt do the vendor sale in November.  If I am, I need to make a lot more crocheted items – including a lot more variety.  The thing is I feel if I’m going to do the vendor’s sale, I should be able to take credit cards.  This I’d have to figure out.  It’s a lot of research and I’m not sure I want to hassle with it.  This is why I waffle.

If I do the vendor’s sale, I could take my books and crocheting.  I might be able to put out my books and sell some with more profit going into my pocket.  It’s definitely something to consider.

Right now on my couch, I have a dozen projects but have been so buy writing, I don’t have time to crochet.  I may have to take a Saturday or Sunday to binge watch something and work on finishing projects.  I’ve been getting ideas and ideas and ideas on projects I want to work on so I know I’ll be switching from writing to crocheting in the near future.

This past weekend I spent a number of hours on the computer doing a bit of research through our local library.  It gave me free access to census reports.  A cousin contacted me recently with information on one of my family lines.  We shared information and I was looking for more.

I started looking for the earliest member I have for this line and could not find him.  This is made more difficult because there are several ways his name could be listed.  He emigrated from Germany so we have the German version of his name.  Then we also have the American version of his name with two different spellings.
Of course we can’t have it be simple either because there are also several family members with the same name so when looking at the records I have to make sure I’m not filling in information for the wrong person.
I thoroughly enjoyed my time doing the research.  It was very exciting to add family members that I didn’t have any information on.  Starting with the information the cousin gave me I was able to add the names of all the man’s children.
Flipping over to the census reports I was able to find spouse and children names.  It took some doing as I had to search under both versions of the last name.  However, I did find a few of the sons of the one ancestor I was looking for.  I was able to add names, approximate birthdates and a few other bits of information.
I was completely enjoying myself until my computer decided to go wonky on me.  I shut down and didn’t get back to it.  The plan is to get back to it in the next few days (hopefully before school starts) to see if I can glean any additional information.  I did narrow down the time frame on one of the issues.
At some point in history the family name changed spelling.  It is a small detail but makes a huge impact as I am doing research.  No one has been able to give me a concrete reason why or documentation.  However, I have a family story (isn’t there always?).  I was able through the census reports to discover the decade in which the name change occurred.  This might be able to help me narrow it down so I can track down when and maybe even why the name changed.
It is a never ending list of tasks when it comes to the genealogy.  I enjoy the challenge and the task of tracking down as much information on a person as I can.  I just wish I had more time and money to spend on it.

One would think a trip to the cemetery is a sad event and not one to be excited about.  However, I’ve been doing some research on family history and finding a number of family members are buried in a local cemetery.  The really great thing is that it is on both my side and Ken’s side of the family who reside in this cemetery.

This of course means I must go to the cemetery to see if I can find them.  Most of these people I don’t have very much information on so it is a gold mine depending on what information is on the headstone.
I’m bringing my husband and daughter with because it should be interesting for both of them.  I’ve invited my mom and sister as they are also interested in the hunt for family members.  It looks like it will be quite the outing.
My daughter has agreed to bring her digital camera.  I’ll have to get a listing of people I think are there or maybe just take the binders I have of people – I’ll have to decide.  I’d love to just go through and take photos of all the headstones.  However, I don’t think I’ll have the time to do that as this is a fairly large cemetery.  It would be a bit undertaking to creating that kind of list.  Of course if I did I could publish it and I’m sure a bund of genealogists (professional and amateur) would appreciate it.
I probably should call the cemetery office to see if I can locate where exactly the graves might be.  I got the general location but it would be nice to be able to narrow it down a bit.  Also it would probably be good to make sure it is okay for us to come traipsing through.
All in all I’m pretty excited to go check out the cemetery and see what information I can add to my family history.  Hopefully we have a good day for wandering around outside.