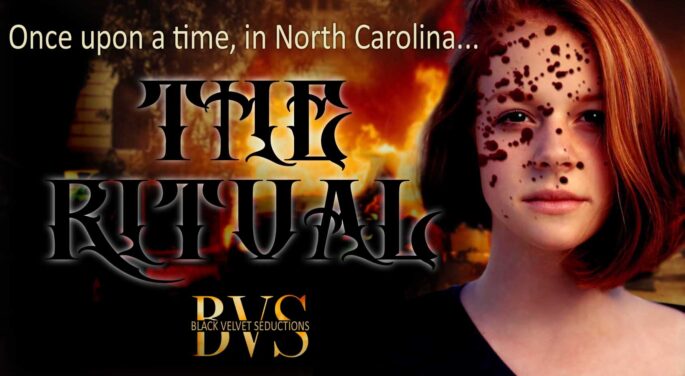 Virginia and I connected up through mutual friends. She’s a blast and you cannot take her seriously on anything.

Virginia Wallace was born and raised on the Chesapeake Bay region of southeastern Virginia, USA. She’s lived all over, from the mountains of New England to the American Midwest.

Virginia first learned to tell stories as a teenager, via playing role-playing games such as Dungeons and Dragons and Vampire: The Masquerade. It would be years before she began putting her tales on paper, but she’s been making up for lost time ever since.

The novel When the White Knight Falls marked her debut into the mainstream publishing world, and she’s also appeared in the anthologies Desire Me Again and Cowboy Desire; all three were published by Black Velvet Seductions.

Seven Forbid was her first solo collection of short stories, which she swiftly followed up with Eternally October.

Now see, I NEVER know how to answer that one! I mean, where do I even start? ‘I was born an orphan at the age of four …?’ I’m an author. And also a smartass. And I really like beer. Does that work as a starter? I s’pose I can add that I like whisky, too, especially Scotch. Single Malt. Oh, and at least twelve years old.

I was fourteen. I was homeschooled, and my assignment that year was to write a novel. It sucked, but I fell in love with how much fun it is to tell a story. That was the same year that I also discovered the work of comic-book writer J. Marc DeMatteis. I loved his stories so much that yearned to be just like him! I found the dark intensity of his tales absolutely mesmerizing.

I’ll read just about anything you put in front of me. Ooooh, look, a pamphlet on hemorrhoids!

Adults. I tried writing a YA novel once. It went to hell real fast …and by hell, I actually mean Hell. No foolies!

I’m in Black Velvet Seductions’ new anthology, ‘Dark Desire’, which should debut this spring. I’m SUPER stoked about that one!!! I have two stories in it. Romance with a body count, you know?

Well, ‘Beginning Forever’ marks the return of Jillian the werewolf, who was featured in ‘Desire Me Again’, also by Black Velvet Seductions. I also have a brand-new tale called ‘The Ritual’, starring Romy—a pyromaniac serial killer. I hafta admit, ‘The Ritual’ is my favorite short so far!

Oof … I ain’t written a blurb yet. My bad! But when I announced the contract signing, I said this: ‘Meet Romy! She’ll set your world on fire! And probably you along with it.’

“How’d you grow up in North Carolina without learning to use a shotgun?” asked Romy, handing Bert the freshly-loaded weapon

“We were never allowed to have guns in the house, at least not after Dad shot Grandma.”

“Was it an accident?”

Bert sighted carefully, pointing the shotgun at the younger man’s surviving kneecap. He was grateful that the old man was momentarily silent; he always hated it when people begged for their lives, and so did Romy. Life is short, and when it’s over, that’s it. Both he and she were offended that people would so often debase themselves seeking a mere few minutes more of panicking, wretched life.

“Maybe we should give this guy a free pass,” said Bert regretfully, raising his gun again.

“Well,” said Romy, waving away the acrid gun-smoke as she wiped the spattered blood from her pretty face, “at least you hit his head just fine!”

Yes, but I can’t share it. It’d be a spoiler, you know? It’s the scene in which Bert and Romy met, and fell in love.

How much time do you have to devote to writing? Don’t answer. Shut the hell up. Whatever you were about to say … it ain’t enough!!! 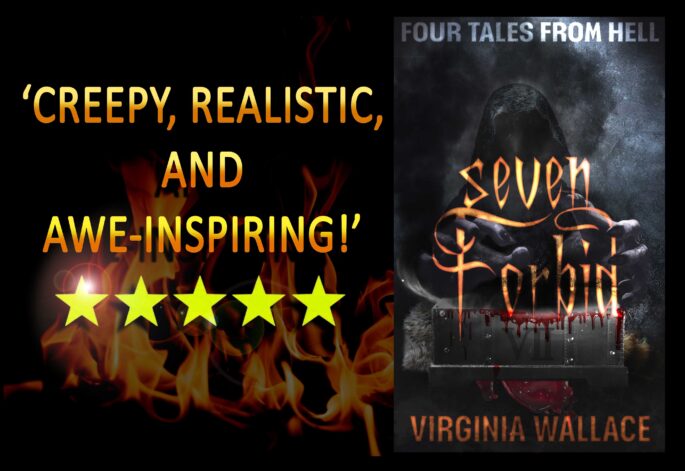 Welcome to the dark world of ‘Seven Forbid’, with four tales to keep you awake at night!!!

The People of the Lie

Bobby is elated to meet his adolescent crush, by pure happenstance. But as he slowly gets to know the iconic Hollywood siren, he begins to suspect that the glamorous world of celebrities might not be as glamorous as he’d once thought …

On a bright sunny morning, away in a mountain cabin, a pretty teenage girl awakens to find herself completely alone. This is odd, because her aging, married lover brought her here for a weekend getaway. Where did he go? Why did he leave? And most importantly, what are his plans for her?

The Day Punkin Blew Up the Devil

The sleepy town of Watsonville seems to have suddenly found itself hypnotized by its charming new mayor. As the mayor slowly begins selling out the town to the forces of evil, only one person has the courage to defy him: a strange young boy in a coonskin cap, known by the moniker of ‘Punkin’. Watsonville is swirling into a maelstrom of darkness. Does Punkin have what it takes to stop its descent?