Believe it or not, people can disagree and still get along. In these three books, it’s a prelude to and the huge change in Decker and Adara’s roles. Decker grows a lot in these books. I knew by the end of Convictions that changes had to occur for the series to remain interesting. Unusual for me, I actually had a plan for these three books. Generally, I go with the flow but I know I wanted to shift the story to a new direction.

What’s the fastest way to get rid of people? Change the rules. Command changes the rules and in the process alienates (pun intended) the aliens. Some of the inspiration comes from the racial tensions we experience and some from historical events like the rise of Hitler’s Germany. It all got rolled up into one ball and this book is the result.

Disagreeing without fighting, Adara and Decker face the new challenges as Command issues new mandates restricting how all members do their jobs.  Tension rises on the ship and across the human territory.  Diplomatic relations with the Tuscalains goes poorly for the humans but not for the Wayfarers. Racial unrest ripples across the human territory, hitting close to home with Adara’s family.

Will Decker and Adara get on the same page?

I think this quote “The only thing necessary for the triumph of evil is that good men should do nothing.” (Edmund Burke) Mandates – rules being changed which are inherently (from the Declaration of Independence – read it – it’s powerful) unfair and unjust. So throw those influences in and add in Adara and Decker’s sense of right and wrong and out pops Contentious.

Racial tensions rise with many attacks on other races. Allies are attacked, humans only is on the rise.

Have they reached a tipping point?

Adara’s always wanted a home. For her, it’s usually a ship but now the Wayfarers and a bunch of others need a home. Somewhere they can build what’s needed to move forward. What better way to do this than find a bunch of planets in a protected location and go there away from those who don’t want them. I remember thinking of the Oregon Trail my daughters used to play when they were young. A trip over a long distance isn’t as simple as it sounds. There’s always hazards and difficulties. Adara has a somewhat idealistic view on life until she has to organize a lot of people into some sort of cohesive organization.

Adara and Decker gather up the Wayfarers, Humans, Briskans, and a variety of other races to leave.  Friends, Georgette, Luke, and Drake, join them bringing needed skills.

Building a new society, Adara struggles with all the responsibilities on her shoulders.  An uncomfortable ship, seven months pregnant and a saboteur create an intolerable situation.  Teamwork and drawing on all resources, including the children, helps get all the tasks done and sets a precedent on how they move forward as they travel to their new home.

Will they survive the saboteur?

To read about the other books in this series:

Or visit the Wayfarer page – https://eileentroemel.com/books/wayfarer-series/ 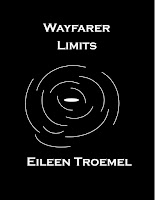 The new Wayfarer book is out!  Wayfarer Limits is all about defining the limits in the characters lives and what are acceptable limits and what limits are not acceptable.

Disagreeing without fighting, Adara and Decker face the new challenges as Command issues new mandates restricting how all members do their jobs.  Tension rises on the ship and across the human territory.  Diplomatic relations with the Tuscalains goes poorly for the humans but not for the Wayfarers. Racial unrest ripples across the human territory, hitting close to home with Adara’s family.
I’ll be updating my website as soon as links become available.  So go here to find the links where this is for sale.
For the rest of my day, I’m planning on working on editing or maybe watching disaster movies.  I’ve not decided.  I’m really excited about this publication.  It wrote fast and edited really well.  Right now I have five or six manuscripts to edit.