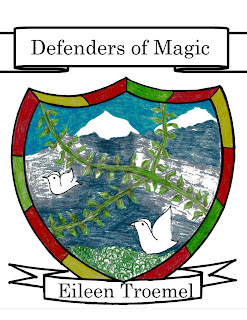 We know where mom is going when she’s released, but we aren’t positive when she will be released.  This week she sees the doctor and hopefully she will be done with the antibiotic.  Then it’s up to the nursing home to say how long they need her for therapy to prep her for release.

Thank goodness for my daughters.  When I’ve needed to rant, they’ve listened and not judged.  When I needed a reminder that I can only do what I can do, they’ve let me know.

In amongst all the craziness of the last few months, I’ve managed to finish Defenders of Magic.  It’s available on Amazon and Smashwords.  I’m also working on a few manuscripts to get them ready for publication.  Wayfarer Home will come out next month (hopefully).  After that in the series, I have Wayfarer War and two more.  TJ Jahns did the covers for the Defenders series and I like how they turned out.  This one is the conclusion to the story.  It took seven years but I finally finished the story.

The writing tasks and the crocheting I’ve been doing help keep me balanced.  I need this more than ever now as I’m handling so many other tasks.

Today I’m having a snow day – or more precisely an ice day.  We had rain and then snow.  The roads are bad from what Ken said.  We didn’t get a lot of snow but it’s the ice underneath which causes me problems.  The most hazardous for me is the parking lot.

While I’m off, I’ve checked my work email, personal email, and have done some writing / publishing tasks.  I’m going to make some changes to the paper version of Defenders of Magic (format changes) and then submit it for the third time.  Hopefully this time it will be how I want it.  Once I’m done with that, I’m going to work on my crocheting projects – dishtowels, daisy coasters, dresser scarf.  I’m waiting on thread to arrive.  I might check on the orders to see when they will get here.

I’m hoping to get a lot accomplished today on the writing and crocheting front.  Then when I face the world again tomorrow, I’ll be ready for more of the other stuff – mom’s tasks, work, and so on.  Also I’m hoping the roads and the parking lot at work are in better shape.

I’m getting an education which I’m not sure I want.  With my mom in the nursing home, I’m taking point on her financial stuff.  My siblings are standing behind me which is nice.  However, it means I’m digging into a lot of tasks and information in order to take care of my mother’s stuff.

Here are a few things I’ve learned.  Make sure you have a power of attorney for both health and finances.  This is just a first step.  In addition, give the person who is POA access to medical and financial stuff.  This doesn’t mean you have to turn over your accounts to them but it makes it easier.  Mom has bills to pay and while she is able to write checks and such it is hard for her as she is tired and recovering.  I had to go to her bank get to become an authorized signator on her account.  This allows me to sign her checks and pay for things with her money rather than paying for it myself and having to get paid back.  The medical allows the medical community to talk to me about her appointments and her treatment.

This is the business end of it.  When my sister and I went to prepay for my mom’s final wishes (no she’s not dying but it’s better to be prepared), I had to write a large check.  Every time I write a check, I question is this necessary?  Is this what mom would want?  I’m spending someone else’s money which in theory sounds fun but the reality is I’m more conservative and concerned with her money than I am with my own.

Mom needed a few clothes and a new bathrobe.  My daughter and I shopped, got good prices but still I questioned whether I was getting the right things, too many, not enough.  It’s her money.  It’s hard for me to spend it.  I know – this is what I’m supposed to do but still.

There are so many details to keep track of I feel like I’m forgetting something important.  We are trying to get mom registered with a county program to help once she goes to my sister’s house.  This means I’m looking through all of mom’s paperwork to pull what they need.  In order to qualify for the programs, she has to have less than $2000 in assets.  This includes life insurance policies, money in the bank, and anything else (cars, houses etc).  The more she has, the more I have to figure out if it counts.  Apparently for life insurance, whole life counts against her assets but term life doesn’t.

Mom has one policy.  I called and asked.  They wouldn’t talk to me.  I understand I’m a voice on the phone but I had to fax over the POA which isn’t really in affect because mom isn’t incapacitated.  Next I have to call again and work my way through their phone system.  It eats up time.  Once I get the answer to my which type of policy is it, I’ll have to take the next steps.  Whole life she has to cash in and then spend the money down.  Term life she can keep.

It’s a lot of work.  It’s a lot of details.  With mom being 86, I know at some point dealing with her will and her belongings is going to be an issue.  Since I’m her executor, I’ll have all those details to deal with.  I’m trying not to stress out about all of this but it all rolls into one massive ball of wholly shit this is a lot.

I keep reminding myself I can only do one step at a time, one thing at a time.  I have wonderful family backing me up.  With six of us total, we have rarely agreed on anything but when it comes to mom we all seem to be on the same page with her care and how much we’re willing to allow the medical people to do.  My daughters have been amazing with offering support via phone (for the two in Georgia) and with helping with all the details.  My husband has been good about helping with logistics and being there to listen to me cope with all of the stress.

I’m learning a lot with this whole process.  The next step – when I have time to take a breath – is to get stuff set up for my hubby and me so it’s as simple as possible for our daughters.

I’m very worried that the politicians in office now are going to ruin our economy and society.  I’ve spent the morning contacting every one I could with the message below.

Here is a web site you can use to find out who represents you:
http://www.usa.gov/Contact/Elected.shtml

I wrote the following that I sent to both my senators and representatives.  I also sent pieces of it to the President and Vice President.  I have no idea if this will do any good.  However, I feel like I should speak out.  I’ll at least have voiced my opinion.

I urge anyone who feels the same way to do the same.  If you want to copy what I have below – feel free.  If you have additional ideas – add them in and post them here.  Maybe if we all start talking one on one with them – flooding them with our beliefs then they will start to listen and act appropriately.

Here is what I wrote: