With nine days off, you would think I got a lot accomplished.  I did when it comes to spending time with my girls but off my to-do list?  Not so much.

I got 70 stars made but I need to get 30 more done.  I’d like to get them done sooner rather than later.  But it wasn’t this past weekend.  I guess I’ll take them to work with me so I can work on them during my lunch hour.

I still have a shawl to do and I have an idea on how I want to do it but I have to see how I think it will work out.  Part of me is itching to get these two projects off my list.  I know I have two more right on the heels of it which are both started.

The good thing is I got edits on the computer for the next Wayfarer book but I didn’t get the second Wild Magic book edited.  That stays in my bag to work on. 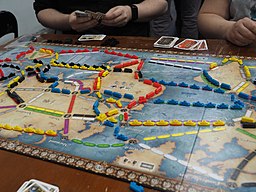 Oh and if that isn’t enough, the girls brought home this fun, addicting game called Ticket to Ride – which is about building trains on all sorts of maps.  We found out there’s a version of it I can have on my phone.  This is a mistake but it’s on my phone.  Oh my goodness – I can’t stop playing.  Saturday night I stayed up till 1 in the morning playing it and I didn’t notice time passing.  I’m going to have to be firm with myself because I have too many other things to do.

On Facebook I’ve been seeing snippets from JD Robb’s books.  It made me want to read them.  I got through the first three in no time.  I’ve got a Dragon book I’m reading too.  I like the premise of the dragon books (and who doesn’t love dragons?) but there is a touch too much repetition for me.  There are 64 chapters in the book I’m reading but they are short chapters.  I’m sort of interested but it doesn’t hold my attention.  I’ll get through it eventually and I’m hoping there’s a tipping point where I get enthralled in the story to the point where I can’t put it down but I’m not holding my breath.  On the JD Robb books, I’m not sure whether I’m going to reread the whole series (she has a new one coming put in September) or not but I thoroughly enjoyed the ones I’ve read so far.  I’m also reading a review book.  I need to struggle my way through the end of it and write the review.  Then I have two or three more to read for reviews.  I hope they are better than I expect.

It’s been a busy week.  I’ve gotten some of my writing stuff done but mostly spent time with family.  My daughters came to visit.  We played this new game called Ticket to Ride.  It was fun.  On the surface it was simple – pick tickets and build your trains from one station to the next.  Then as you get playing you realize there are strategies involved.  For instance, when to pick more tickets?  How many trains do you have to build your trains?  We’ve spent the most time playing this game and having a great time.

This weekend will be about getting the errands done.  The nice thing is both Vicki and I are off so we will be doing a lot of the errands tomorrow.  On Saturday we will be going to Ikea and a phone place to look at phones for mom – one for the hearing impaired.

I still have edits to put on the computer and editing to do on a manuscript.  I’m crossing my fingers to get part of that done yet.

I have gotten 70 of the 100 coasters made for the event in November.  I’m hoping by the end of the weekend I’ll finish them.  Then I have to work on the raffle gift basket I need to send with it. I also need to consider submissions for crochet projects.  I’ve got one done so I’m going to try to take pictures of it and send them to the publisher.  My priorities there are coasters, shawl (for submission), gift raffle item, and then other projects for submission.

I’m also prepping for a blog tour.  Royal Undercover is going on a tour of blogs.  This will be my first one.  I’m very excited about it.

Yesterday, I woke up and intended to write.  I started writing and didn’t make a lot of progress.  My day was somewhat putzy with conversations with my middle daughter and work.  I spent a chunk of time taking care of work stuff and waiting on business stuff for my writing.

This of course means I was playing games on the computer while I waited.  I enjoy the games but by the time I had lunch I was annoyed with myself.  Here I am alone in my house and instead of being productive, I was playing Royal Envoy, Backgammon and Rummy 500.

To be fair, I was waiting on Amazon to process my change in price on Wayfarer.  After I quit playing and got lunch, I started writing.  I wrote all afternoon.  I wrote well into the night.  I nearly forgot to eat but my stomach was grumbling at me.  I heated up supper and ate before going back to writing.

I quit writing when I couldn’t keep my eyes open.  I came to a scene where I wasn’t sure which direction I wanted to go so I wrote as far as I could and quit.  This was a little after midnight.

I hate mornings like this because I wake up feeling groggy and grumpy.  The good thing is at 2:30 I woke up knowing what I wanted to do with that scene.  Now when I’m done with my morning routine of checking email and such, I can hit the scene and move forward.

Yesterday with all my putzing, I still managed to write 12,000 words.  I got so much further in my story and am pleased with all the scenes I wrote.  I have two more scenes in my head to play out.  Now I’m finding with this book that the characters and story are taking me to scenes I hadn’t expected so those two scenes will likely turn into several other scenes but for now, I am going with two scenes.

I have today and most of the day tomorrow alone still and I’m planning to make the most of it.  I will write the scene in my head, take a shower, and get breakfast.  At some point I have to pay bills,  However, if that doesn’t happen until after Ken’s home it isn’t a big deal.

There are just some activities that suck up your time.  You say “I’m only going to spend ten minutes on…” and then suddenly it is hours later and you are still on that site.
This week while I’m home alone all day I have certain goals – mostly to work on cleaning my office.  This means while I am checking emails and so on I have to avoid sites like Ravelry, Pinterest, and Facebook if I’m to accomplish anything at all.
Don’t get me wrong I LOVE wandering around these sites.  I find inspiration and laughter and a lot more on the sites.  However, I lose time like it is leaking through a sieve.  If I want to accomplish stuff I have to not look at those sites.
The other thing that sucks up my time is the Kindle Fire that was just handed down to me.  I’ve been setting it up and removing things from the carousel.  I like the format but Kindle missed the mark when they didn’t allow you to put things in folders on the Fire – now if anyone knows how to do that – they should let me know.
Along with setting things up I’ve been playing games on the Fire.  Backgammon, word games, Phase 10, Skipbo, and so many more are on there, and last night I spent hours playing backgammon, and others.  I will not be touching it today as I have too much to do.
I have a crochet to do list and the other tasks in the office I want to get done.  Since my gout is bugging me today, it will likely be a crochet day.  I have a long list of what I need to do for crocheting.  If I can’t accomplish one goal, I’ll work on the others.
However, I will be avoiding those damn time sucks as they steal away all my good time so I cannot get done the things I want to get done – even if they are fun to spend time doing.